Is there really such a thing as Sasquatch - aka  Bigfoot, Yeti?  So much talk . . . so few facts.  And no really solid sightings that you can say 'This proves that Sasquatch is out there!'  I always thought all the fuss was in the Pacific Northwest.  But the Uwharrie National Forest has recently become one of the key areas of focus in trying to either prove or disprove the existence of the illusive creature (assuming he / she exists at all!)  Even Animal Planet is on the bandwagon!  Check this out!

To understand where I'm coming from you have to understand my day Saturday . . .  it's a long, boring story.  Sorry.  My suggestion is to skip this and go find another blog.

The event was the Uwharrie Mountain Run . . .  a super cool event with three separate races: an 8 miler, a 20 miler and a 40 miler.  Last year I had run the 20 miler (ended up being about 17.5 miles as they routed us around a difficult, muddy section since there had been days and days of huge rain).  So I thought it was time to step up to the 40 miler.  I mean . . . how hard can it be?

Friday night Ron Fleming, Scott Wingfield and I picked up our race packets at the pre-race pasta party.  And we got our race numbers.  Here is where it all started going wrong!  Here is my number . . . 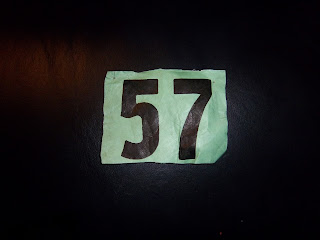 Those of you that know me know that I am a master at numerology when it comes to race numbers . . . years and years of careful study and detailed data analysis.  Usually . . . just by looking at a number I can tell what kind of race your going to have. Almost infallible!  And those of you that have studied under 'The Master' know that a '57' is one of the WORST POSSIBLE two digit numbers you could EVER get!  The two slowest number possible and they are unbalanced . . . but I won't go into race numerology here!


Started out the day at dawn . . . probably 34 degrees and raining cats and dogs!  Perfect!  Everyone was shivering and trying to get out of the rain.  Sloppy, muddy, cold.  (Photos compliments of Shannon Johnstone).  Finally, 7 am and we were off!


At about the third mile I took a fall.  Didn't seem to hurt anything.  I'm relieved 'cause I 'm pretty sure I had broken my wrist on a fall at the Medoc Rerun after Thanksgiving.  The wrist still hurts most of the time and I had feared falling.  About 1/4 mile later  . . . I fell again.  Minor wrist pain.  I was lucky!  But these two falls started working on my mind!

Lots of mud, rocks, hills, water, swollen stream crossing through cold water.   (Even crossed a few that didn't have to be crossed . . .  yea . . .  screwed up!  See picture below! )  Did I mention there was a lot of mud, rocks, hills, water, and swollen stream crossings?  If you haven't run Uwharrie, you need to, just so you can understand!  Everyone needs to run a serious trail race.  Not the Umstead Marathon, New River Trail 50k or even Medoc (one of my favorites!!).  All those are great, but try a serious, hard core trail race. 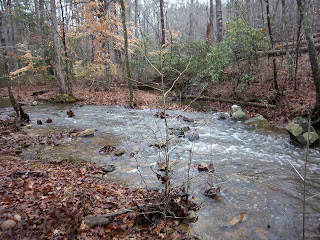 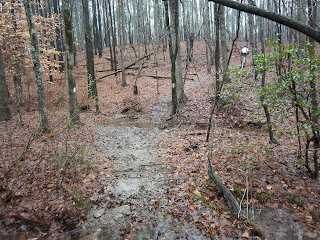 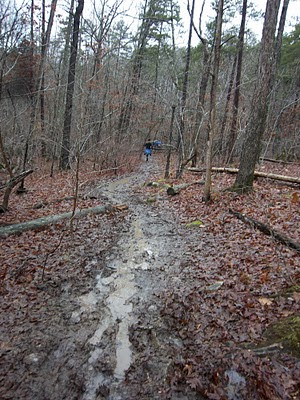 Things continued pretty uneventful until about mile 10-11.  The rain ended and I took off my rain shell and stuffed it in my backpack.

After my two falls, I was trying to really be careful about my footing.  I was going downhill and really feeling good!  Making good time (for me!).  Then, I find myself laying on my back . . . on the trail.  Head super woozy and seeing stars!   WHAT THE HELL??  What happened?  Where am I?  Why am I lying on the trail?  What the F***!

I don't run all that fast, so I'm sort of wondering how that tree could have knocked me cold!  I mean, how fast could I have been going?  What else could have happened?

I want to state flat out that I NEVER actually saw Sasquatch.  There is no way I can honestly say that Sasquatch clubbed me as I passed that tree.  But is it reasonable to assume I just ran into a tree and 'cold cocked' myself totally out?  Could this have happened?

I don't know.  I didn't see anything and I don't remember anything.  You be the judge!

Guess I just sat there on the trail for 10-15 minutes . . . until my head cleared and I felt like I could stand and walk.  Eventually, the cob webs cleared and I continued on down the trail.

About ~1/2 mile later I realized my gore-tex rain jacket I had stuffed into the webbing of my pack was gone!  So I turned around and headed back . . . across a big stream crossing . . . back to where I fell.  Where I found my jacket!

Bonus miles!!  Got to love them!

Saw so many friends as they were heading back to the start on their way to a 40 finish.


By about mile 18 my head had pretty much cleared . . . and I was just a little loopy.  But I really loved the last 6 miles of this course.  Last year, they detoured us around this section due to mud and high water, so I didn't know how nice this section really was.  It had the biggest climb of the day.  Tons of mud.  Twisty trails . . . and the deepest stream crossing of the day.  I thought this was the hardest part of the 20, but I did love it!