It really all started in 2015 when I bought this:

It's a small, box elder Sebenza from Chris Reeve Knives.  And what a beauty it was.  Unbelievable quality and so functional.  I've always loved knives but this one was "over the top" in every way.  Oddly, the colors in the wooden handles (called scales to a knife fan!) reminded me of my daughter's hair. Yea . . . I know that's a little strange but it is true!!

After several months I had an idea.  For years my kids have known for years that I enjoy knives and I decided a cool thing to do would be to give a special knife to each of my children when I die.  My idea was that every time they saw the knife, held it or used it they couldn't help but think about me a little.

So my plan was set but all I had was a knife for my daughter.

I've been a fly fisherman all my life and as soon as my son was old enough I started him fly fishing too and that has been something we shared for years and years.  So when I saw a picture of a Chris Reeve Sebenza Pheasant Tail I knew instantly that this was the knife I had to have for my son.  This was a very limited edition knife and it took months of searching online before I finally was able to locate one that I could afford.  But when it came I was blown away.  This knife fit the bill exactly! 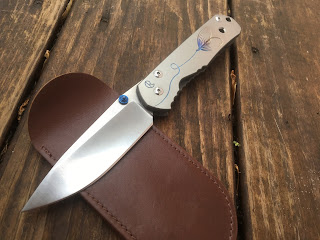 So I wrote a letter to my kids and told them of my plan and showed them pictures of the knives that I had for them.  They knew where the knives would be and which knife was my daughter's and which was my son's.
A couple years past but then the unthinkable happened.  I lost my daughters box elder Sebenza.  While playing golf I took it out of my pocket and put it in the golf cart tray. But when I finish playing I forgot to put the knife back in my pocket. I was probably 10 minutes away from the golf course when I remembered my error. I immediately turned around and quickly drove back.  The golf pro said nothing has been turned in and he and I both went and looked in every single cart but my Sebenza was not to be found.  Well actually, I'm pretty sure it was found by someone who just decided to keep it.  My knife was never turned in.
I'm not wealthy and I couldn't just immediately go out and replace this knife.  It took me two years before I finally decided it was time to find the replacement.  My daughter didn't realize what she was doing but she actually picked this knife out . . . a Chris Reeve box elder Mnandi with a Damascus blade.  Perfect for her! 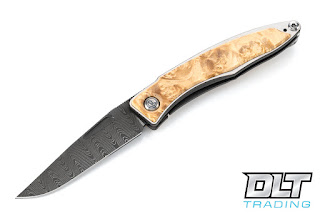 For years my daughter had been living in Colorado and my son and his family were living in Texas.  And as a result, it had been years and years since our whole family had been able to get together and celebrate Christmas.  In the weeks leading up to our family reunion I thought a lot about my plan.  And then it dawned on me - if I carried out my plan I would never be able to see their faces when they got them their knives nor see them enjoy carrying them.  So this Christmas I took the knives and gave them to my kids.  Tears were shed.
This was probably my best Christmas ever!
PS . . . don't worry!  I also have a plain jane small Inkosi that I continue to carry daily! 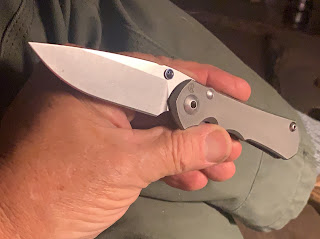