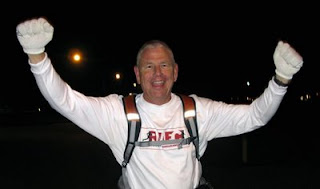 It was getting dark, the bottom of my left foot was burning from blisters, my right ankle hurt from a mis-step just past the 3/4 of the way, and when I ran all I could manage was a painful "survival shuffle." But all I had was 5 more miles to go!

Thanks to the really bad influences of my Mangum Track Club (MTC) fellow members, my personal running goal for 2009 was to run a 50 mile run. Before meeting these folks I was very happy just running marathons.

I was going to make my 50 mile attempt at the Rocky Mount "Relay for Life" event in April. But I started getting worried! My fitness level seemed to be declining. Had two "bad" marathons in a row (George Washington's Birthday Marathon in MD and Umstead Trail Marathon two weeks ago in Raleigh). My job was keeping me from a significant number of my normal daily runs at lunch. And the runs I could make, I was struggling through. So I was worried. Plus, I needed to do a 50k run soon to "hold my fitness level" until the late April Relay . . . but there weren't any close by! Add to that, I started thinking more and more about doing 200 laps round and round and round a 400 meter track! Sounded worse and worse to me!

So I decide to "go for it" early! Rocky Mount has a great 1/2 marathon course that's not too terribly hilly, and is essentially a figure 8 course . . . Plus, there is a parking lot at the intersection of the two loops that I could use as my "home base."

Brad Weisner decided he wanted to go part way with me. Brad and I get along GREAT! And we have a similar pace so this was perfect!

Saturday morning started out in the 30s with "Carolina Blue" skies! Several of my ultra running friends had told me to start out going WAY slower then I really thought I should, so I listened to their advice. Brad and I were nearing completion of lap 1 when we met up with Elaine (Brad's wife) and Misty Schmitt, another RMEC marathoner. Then, we saw Andy Barker and Carol Dickens (more friends and RMECers) who had come to ride bikes with us . . . and brought a grocery store full of supplies!

After another 6-7 miles, Carol, Misty and Elaine went for coffee and donuts as Brad, Andy and I continued. Brad had told me last Thursday he might try to do 26.2! And that is exactly what he did! Amazing! Not much prep work at all! I'm guessing his "long run" in the last few weeks was 12 miles max!

At the marathon point I had a "sinking spell" of sorts. Felt really tired. So I had a cup of cold chicken noodle soup, some ibuprofen and headed out with Misty and Elaine.

Brad packed it in (though it seemed to me he could easily have kept going . . . he is amazing!) as did Andy and Carol. But Misty and Elaine decide that wanted to do another 5 miles! We walked about 3/4 mile and I started to recover.

We took a quick pit stop at Chico's. As we started to run again, I had a mis-step and twisted my ankle! I can't tell you the sinking feeling I had! To go this far and have this happen! Damn! But I kept moving and it did start to feel better. So I continued on. Got back to the car where Elaine and Misty said good-bye and I headed on alone towards Battle Park.

I started craving a Micky D's double quarter pound cheeseburger and a Diet Coke. So I called Connie (who was standing by to help any way she could!) and she met me in the park with the goods! I can't tell you how good that tasted! The coke was exactly what I needed and it was really good to see Connie! She picked up my spirits! Continued on to MLK Park and made the circle when Andy called and wondered where I was. Met him for a 1 1/2 miles or so back to the falls. Then, I continued on by myself to my car where I re-fueled (more chicken noodle soup!) for the final 11 miles!

I was really still doing okay at that point! Decided to do all 11 miles in the West Haven area, since I knew darkness was coming and Battle Park was probably not the place to be running / walking in the dark, even though I had my headlight.

Up until mile 44 or so I had managed to stayed in good spirits but then the wheels tsarted to fall off. Another "sinking spell" hit and hit hard! About that time I saw Brad! He had come looking for me and offered to walk the last 5 1/2, but I told him "no"! After his marathon, he had gone home and cut his grass! This guy is crazy!

Soon after seeing Brad, I got a another call from my son, Michael (he had called periodically all day). Another "pick-up" in my spirits! By this time it was getting really dark Only 4 miles to go . . . but I was struggling badly! Got a call from Michael Forrester (RMEC "Grand Popa") who wanted to meet and do the last 3 miles with me! Again, another lift of my spirits! I was doing the "survival shuffle" . . . sort of running the down-hills, but walking most of everything else!

Passed Chico's one last time and headed for the car and the end of this run. And who was there but Connie! With my favorite - Cracker Barrel's chicken and rice!!

Glad this one is over! 13 hours and 44 minutes! Don't believe this is quite world record pace . . . but it was a PR for me! And since I was the only "competitor" I guess I won! And set a new 50 mile course record to boot!

And most importantly, the American Cancer Society got needed contributions! I hope it helps!

My recipe for success! 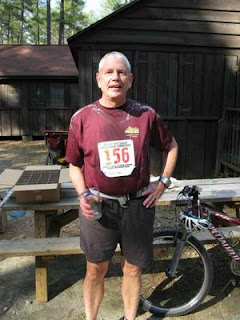 It is so much more fun to be at races with friends!!! Dave Lavely, Scott Wingfield, Michael Forrester and Cam Kelly all ran (see above picture)! Got to spend a bunch of time together before the race! Friends just makes it better!

Talk about tough . . . this marathon was a tough one! Two factors: 1) hills and 2) temperature.

Umstead is a great place to run and it has it all! Single track trails, fine gravel roads, flat areas and, of course, hills . . . lots of hills. The first half of the race seemed to be a tad flatter then the second half. But it maybe I just got tired for the second half.

The hills were hard but really not that bad, I've run much harder hills.

About half way, we went through a section called Turkey Creek North. Three tough hills in a row, hit a flat section for maybe 1/2 mile, then turn around and go back the way we had come. Really hard given the temperature . . . by this time the temperatures had climbed into the low 80s. For the last three weeks, we have had temperature daily highs in the 20s, 30s and low 40s. Snow the previous weekend. Just no time to get use to higher temperatures!

When I finally got back to the RMEC (Rocky Mount Endurance Club) manned aid station a little past mile 19 , the race official told me I had missed the cut-off by seconds. I talked him in to letting me try to make the next cut-off point. Not sure how far it was . . . maybe 1-1/2 miles. But I gave it all I had (which really wasn't all that much!) but I can't remember when a ran that hard! And I made it! So, from that point on - no more cut-offs! All I had to do was finish. Got to admit I really struggled and was spent at the finish. But I finished . . . the last official finisher!

A special thanks to the RMEC members who gave up a beautiful Saturday, drive from Rocky Mount to Raleigh and man the aid station! Ryan Bullard, Steve Cooper, Larry McKeel . . . I remember seeing all you! Believe Ursula Forrester was there too, but I don't remember seeing her.

And another special "thank you" to the Godiva Track Club and all the incredible volunteer out! Aid stations were great! Smiling and encouraging folks at every stop! Especially liked the "South of the Border" stop on Turkey Creek trail . . . they cracked me up and picked up my spirits! All through the race, but especially after mile 16 or so, volunteers on bikes were constantly coming up and asking if I was okay and if I needed water, gels or electrolytes (I'm sure they were worried when they saw me . . . I probably looked like hell and was moving at a snail's pace!) I've done a number of marathons on warm days, but I've never been to a race that was so supportive to the runners! THANK YOU ALL!