I'm a Runner and I'm a Hypochondriac!

I guess I've been one for a number of years, but it's just within the last year where I have come to admit this . . . even to myself. It is a wonder I am ever able to enter a race due to all my medical issues (that reside primarily in my head!).

Luckily I almost always feel pretty good . . . I'm a pretty healthy guy. But just let anything out of the ordinary happen and I turn into "Hypochondriac Man."

Maybe it's a little headache and God forbid I sneeze once or twice. . . within 30 minutes I'm convinced I'm coming down with a really bad case of H1N1 . . . or worse! One misstep on a trail run and I'm re-developing serious knee problems. One good thing is I'm not one to run to the doctor every time. If I did the co-pays would kill me for sure!

Here is an example: A couple of months ago I was on a trail run in Kingsport, Tennessee. About 6 miles into the race, I made a bad step on a pretty technical downhill section and twisted my ankle as I went down. Immediately, I just knew I had broken at least two bones in my ankle. This was bad. First, I needed to crawl off the trail so others could get by (forgetting that I was probably in close to last place . . . guess the pain was really bad!).

Sitting there on my butt in pain (the pain was real!), I started thinking about how they might be able to airlift me up through the trees and off the mountain. After about 5 minutes of sitting beside the trail, I finally realized the only way I was going to be able to get off the mountain was to walk out . . . the airlift idea just wouldn't work very well. I did happen to have some rather strong pain pills with me , so I took them and then made a critical decision . . . even with my incredibly badly "broken" ankle, I started hobbling on down the trail. After maybe 10 minutes of walking I decided to try running some (needed to quickly get to medical help to survive!). Amazingly, running hurt no more then running. So I ran.

Could this have been some miracle? Was it the pain pills that allowed me to "tough it out" through the pain? I think we know the truth!

Just last weekend, I ran the Marine Corp Marathon. The next day I noticed the bottom my right forefoot was sore . . . like a stone-bruise. That night it hurt more. And I "noticed" some swelling. Oh no!! Stress fracture! Had to be! Wednesday it hurt even more! Could it be something WORSE then a stress fracture? What could have happened? Maybe a cleanly broken bone with some serious ligament damage too?

Surely I would not be able to run for at least a month! Maybe more. Heck . . probably more with all that ligament damage I could be out for MONTHS! Who knows . . . maybe this will end my running totally!

Well . . . it's Saturday night and another miracle has occurred. The pain is going away. Quickly! I did two hours on the ellipse machine this morning and I'm thinking I'll try running either tomorrow or Monday at the latest!

Well . . . with some things the answer is definitely YES! A bigger hamburger is always better! Same with a beer.

(You runners are with me, but you x-rated perverted fools are confused! Beer and hamburgers are key to most runners . . . even those runners who have turned away from good, greasy foods and gone "vegetarian" still understand those of us carnivores that remain! And beer is almost universal!)

But when it comes to marathons the answer is not so simple for me.

Just finished the Marine Corp Marathon with over 20,000 of my closest friends. 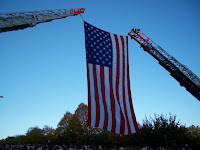 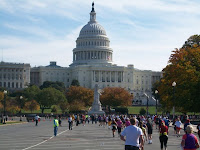 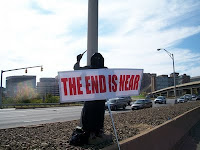 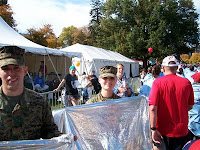 But for this country boy, it was all almost too much. I believe I like a small marathon . . .
I do think everyone needs to do a bigger marathon . . . it's quite the experience. But I hope you also try a small race or a trail marathon. Then you decide.

What a cool run!

The Laurel Run Ascent is an 11-mile trail race in Kingsport, Tennessee. Essentially, the race starts on the Holston River at the foot of Bay's Mountain . . . a 3,500 acre city park and follows Laurel Run creek up the mountain! Cool temperatures and a light rain . . . PERFECT weather for a trail run! 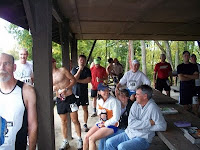 As I registered for the event, I saw they had a beekeepers outfit available for rent! A few weeks earlier at the Bay's Mountain 15-mile Trail Run, virtually everyone got stung by a nest of yellow jackets that had built their nest on the trail! Everyone was still talking about it!! (Eric . . . no one had as many stings as you . . . you won the bee sting competition for that race!)

The first mile up the Laurel Run trail had several boggy spots with a few of them almost sucking my shoes off! But after these mud bogs (actually quite fun!) we had a stream crossing where all the mud was washed off. The complete trail was actually runable with no really super vertical sections . . . but it was a constant uphill grind. At about the 1 mile point we passed Laurel Run Falls, a beautiful waterfall just beside the trail. This day, there had not been a lot of rain, so the falls were not at their best . . . but still beautiful! 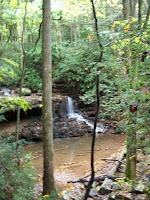 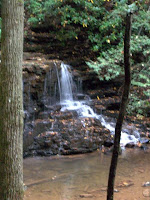 Also, the trail passes two old homesites that nature is slowly taking over. Too bad . . . by this time in the run, I would sure have liked to stop in and have a little 'shine with the owners!! 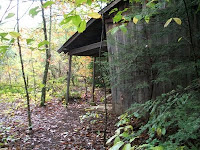 I started running the easier uphills and walking the steep sections but as I neared the top, I ended up walking all but the easiest uphills! As I was at 59 minutes into the run (had gotten to the mountain top and was following the ridgeline up to the firetower), the leader passed me . . . flying down the trail! This guy had at least a 8 minute lead on the #2 guy!

I love how supportive trail runners are of each other! Everyone is so encouraging! Every single person had something positive to say! And everyone had a smile on their face . . . enjoying the day! I bet half the folks told me they had not seen any of those yellow jackets!

I got to the turn-around point in next to last place, with two folks maybe 3 minutes ahead. Had a quick cup of water and was excited to start running DOWN this friggin' mountain! While the run down is a lot easier effort-wise, it's much harder to avoid tripping or turning an ankle . . . you really have to concentrate on every step.

Several weeks ago a bear ran out of the woods and knocked me down as I was negotiating an especially tight, twisty, steeply downhill section. (Okay, I really just twisted my ankle, but the bear story is much more entertaining!) As I passed the place where it happened, I made it a point of being extra careful! A "tricky" place for sure!

I really enjoyed the run down . . . felt like I was flying!!! Blew by one guy one guy like he was walking. Well, I guess he was actually walking . . . just a hiker going down the trail! I continued down at "race pace" and with about 1 mile to go I actually PASSED another guy. This guy was a competitor in the race! YES!!!!

I finished strong and felt GREAT! No bears, no bees and no falls! The award ceremony was just ending. Figures . . . guess I didn't win anything . . . AGAIN!

Mark Skelton and the State of Franklin Track Club do their races right! A really GREAT long sleeve cotton shirt, a nice, insulated water bottle, and great food at the end! All for $20! This is the way races should be! Thanks Mark!

Okay, summer isn't all bad. As a matter of fact it's one of my top four seasons. The lake becomes a fun place to live again! Lot's of swimming, kayaking, fishing, etc. But as a runner, summer is just a season to suffer through.

Our "Nooner" group at the Y keeps going, but no one EVER has a really good run. And my weekend long runs are just demoralizing! The heat and humidity just suck the energy right out of you.

Doug Dawkins has a race at the start of the summer called the "Boogie" . . . you choose either the marathon ("a little Boogie") or the full 50-miler. Race starts at 6 pm in mid June! And as the temperature drops with nightfall, correspondingly the humidity climbs! Doug is just sick! And so are all the crazy folks that line up to run it. Twice I run the little Boogie and twice I've come away mentally beat (as well as physically!). Great way to start the summer off with a big "SUCKS!"

I usually back off in July, just after Mike Day's brutal "Sweaty Butt 50k" on 4th of July. This one is even worse then "Boogie". Single track through the hills of Umstead Park. July 4th GUARANTEES the temperature will be in the 90s . . . and in eastern North Carolina the humidity is always high! My first year I drank a whopping 352 ounces of gatoraide (11 32 oz bottles!) and still was somewhat dehydrated at the end! Every year I just struggle through this one, walking a ton of it.

By the time mid August comes, it's time to start gearing up for the fall marathons. August and early September is usually still brutally hot and humid . . . but we caught a break this year . . . fall came early!

Yesterday was my last long build up run for the Marine Corp Marathon and running is coming back to being enjoyable again! For 15 miles I totally enjoyed myself! Unfortunately I needed to run 21 miles, so the last six weren't quite so much fun, but still I had a great time.

My speed is slowing up even more and my recovery seems to be taking longer . . . but the enjoyment is still there. While I've never been fast, in my mid years I was a "middle of the packer", but now I'm starting to have to worry about cutoff time! At the Umstead Marathon this spring, I JUST made the cut-off and ended up being the last official finisher.

I guess I could start to work on my speed, but for me that is WORK . . . and I'm I'm not running to add more work. I'm running so I can enjoy myself. So cut-off time are just something I'm going to have to live with. But with cooler and less humid fall weather, I'm pretty sure I can beat these pesky cut-off times another year and still run a few more marathons!
Posted by Frank Lilley at 4:02 AM 2 comments: