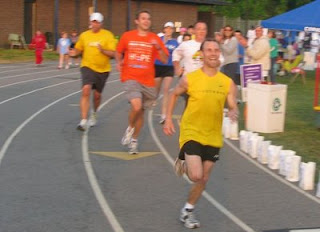 This weekend was the official Rocky Mount Relay for Life. A few weeks earlier, I had had my "own" relay and did my two "races" in one . . . my first and my last 50-miler! But this weekend was the real event and there were two things going on: 1) RMEC (Rocky Mount Endurance Club) had a team to run the 24 hour event, and 2) my friend Brian Langford was attempting his first 50-miler and I wanted to support him as I could.

Brian is a really fast 5k runner and athlete who had never done a marathon, let alone an ultra. Plus, he has recently suffered through the dreaded and mysterious "painful butt injury" (aka upper hamstring, piriformis syndrome, etc.) that seems to come out of nowhere to plague distance runners for a 6 month period. But Brian wanted to attempt this to honor his daughter who had died from cancer. So he decided! I worried that Brian would not be able to start out slow enough.

Right off the bat we realized Brian's original plan would never work. The track was totally packed with people! So many you literally could not run. So Brian decided to start his running by going down to our green way and running that until we couldn't see (no . . . of course we didn't bring headlights!!). Brian and I did one lap (about 5.6 miles), looped back to the stadium to get fluids, picked up Eric Pate and Arthur Bennett and headed out again. At least by starting with me, his first 9 miles or so were slow!

When we got back to the stadium the crowds were still pretty bad, so Brian and some friends (Ashley Bass, Steve Cooper, Michael Forrester to name a few) headed back out to run up and down Independence Blvd. I went into the tent a grabbed some sleep! About midnight Brian came in and told he quite a big group of guys were running with him, but they were going too fast! And of course he was running with them! Idiot! About 2 am I got up, put my shoes on and started running with him again. Scott Wingfield had come as I napped and had run 24 miles or so with Brian. Scott headed home and I joined. Brian was at about 35 miles and doing really good! He had settled into running two laps and walking one and seemed virtually unaffected by the miles. I found out I couldn't keep up with his preferred pace! How embarrassing is that for me!!

At around 43 miles, Brian's achilles started burning so he walked about a mile or so and then started running again. The pain eased. Sunrise was spectacular and we saw a blimp pass in the early morning light. And just before 7 am, Brian finished his 50 miles to the roar of the morning crowd, encouraged by the PA announcer and Brian's feat! Mission accomplished, Brian! I'm proud of you!
Posted by Frank Lilley at 10:59 AM No comments:

I'm was in Tennessee for a long Easter weekend and needed to get in a long run. My favorite place to run . . . ever is Bays Mountain Park in Kingsport. So, the "where" was a no brainer!

There is a terrific 10-mile park loop that I run every time I'm in Kingsport, but this time I needed more mileage, so I added in some of the less used trails for a 13.5 mile loop . . . and I needed 26 at least, so this would be fine!

The park opened a little early and I headed out at about 8:15, straight up the mountain to the sounds of thunder and a pack of howling wolves!! . . .yes . . . wolves! The park has a has a large fenced natural area with a pack and they were tuning up with the sounds of thunder from the coming storm. A line of thunder storms was coming in from the west and this presented quite a delima for me!

There are about 10 tall radio towers along a 1 mile section . . . just where I got to when the storm hit! Should I stop and wait out the lightning, or do I try to beat it? I decided to keep running and try to beat it. In retrospect, this probably wasn't one of my best all-time decisions. My plan was going to run FAST as I passed each tower. But those of ou that really know me realize there are no fast bones in my body! Lightning was all around and hit several of the towers, but none when I was close! Man, was I glad to pass that last tower!

This run is really a spectatular run. Once you get to the top of the mountain, you run along a "knife edge" on a jeep road. Essentially, the mountain looks like this: " > " Two ridges join together at one point. Fantastic views to the right (my hometown of Kingsport) and the left, the next ridge I'll be running. These two ridges meet and you head west on the other. While the ridges are straight, they are far from flat! You are either going up, or down . . . almost never flat. At about the five mile point you pass a cool fire tower (again incredible views!!). After the fire tower, the ups/downs settle down some and the running is pretty easy but the views go away. Not really great views in the rains we were having anyway!

Finally, I took the trail that dropped off the ridge and down to Back Hollow and on to the "road." Guess at one point this really was a road, but now it was a creek/bog/mud pit! For every 100 yards of dry land there is at least another 100 yards of creek to run down! You ford the stream several times and at several points you go through a bog . . . the mud was "shoe sucking!" Once, it literally sucked my trail shoe off my foot! Lots of fun reaching down and trying to find your shoe in a foot or more of mud! Then, hobbling to the stream in socks to "wash" the mud out and get your shoe back on!

I continued down the stream / road until in intersects with Front Hollow "road." This really is a somewhat passable road . . . if you have a non-stock jeep set up for impossibly hard off-road!! The rain stopped by the time I got to this section, but the mud holes were full. This was a long, slow sloppy uphill section to Ledbetter Gap, then a long, slow downhill to where I started . . . about 13.5 miles done and one more lap to go. I re-supplied with Gatorade and had a bowl of chicken noodle soup then headed out again. The weather was now clear and the views were GREAT! I took it easy, walking the uphills and running the downs (very few flat parts, but I ran the few that were there!).

After the fire tower I took a little longer route and tried a trail that was new to me. While the trail did have blazes, it had probably been a couple of years since anyone had been through . . . down trees everywhere, no footprints ever and the trail was REALLY hard to follow. Plus, whoever put the trail in had never learned of the concept of a switchback. This trail went STRAIGHT DOWN the mountain! (more on this part later!). Finally, I came to Back Hollow and continued on. I struggle up Ledbetter Hollow to the gap and a nice, slow run back to my car in about 7 hours! Not a great time, but if you adjust for elevation changes and mud bogs, it wasn't too bad!

After I got home and showered off the mud, I realized that the downhill trail without switchbacks I had really done a number on two of my toenails . . . black and blue, painful as hell and destined to come off! Damn! I'm really sore after this run . . . WAY worse than my 50-miler!

Still, this was a spectacular day. I love running alone in the woods! All day long and I never saw a person! Seven turkeys, one squirrel but no people! What I really miss though, is sharing this super run with my running friends!