While this blog is a running blog, I do want to mention two non-running personal items . . .


But this is a running blog and I need to stick to running here or I'll lose the ten's of readers I have!!

For the third year in a row I've run at least a marathon a month (okay . . . 12 marathons or longer over the 12-month period).  Guess that is cause for some celebration.  Plus, I had two more runs that weren't 26.2 but they ran like marathons - Bays Mountain Trail 15 mile Race and the Uwharrie 20 miler.  I was a 'beat' after each of these as I was after any marathon.

Anyway, running 12 marathons in 12 months really isn't much of an accomplishment.  The first year I set this as a goal, I thought it would be challenging.  But it really isn't all that hard.

Compare my 12 marathons with some friends' accomplishments:
So, to the uninformed, 12 marathons may seem like a lot, but it really pales in comparison to many.

Up to this year I had never had a DNF.  Now, for the uninformed, a DNF is not a good thing!  DNF stands for 'did not finish' and is something we runners all live in fear of.  The longer the distance the worse it is.  Failing to finish a 5k race is really no big deal.  We've run many, many runs and races way longer so deciding to not finish a 5k means nothing.  But that changes when you think about a marathon or longer.  Here, the distance itself is the challenge.  And all marathoners live in fear of failing to finish a race. 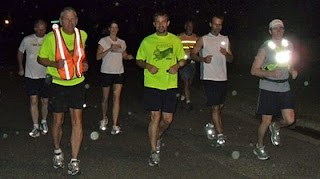 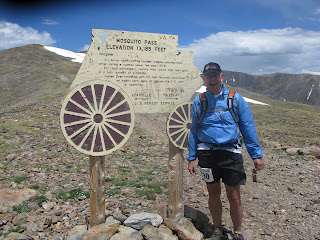 Also, the Friday after the Leadville Trail Marathon I had knee surgery.  Injury happened when I got on the floor to play with my dogs . . . not running!!  Surgery July 9th went super smoothly and on August 10 I ran 13 miles.  Did lose fitness, but the comeback was actually fairly easy. 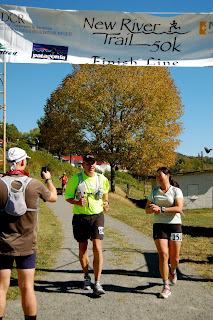 #1 - Finishing the New River Trail 50k this October.  The distance wasn't the challenge but the time sure was!  I had to finish in 7 hours and I just made it!  I worked hard for this finish and it was quite rewarding. 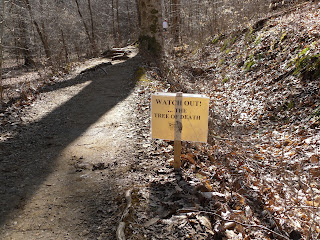 #2 - Finishing the Umstead Marathon and not being dead last!  The year before I had finished, but just barely made the time cut-off.  This year I was safe from the cut-off and had a good finish.

#3 - Got a 'speeding ticket' for running too fast!  That's right folk! A frickin' TICKET!  Doesn't get much better then this. 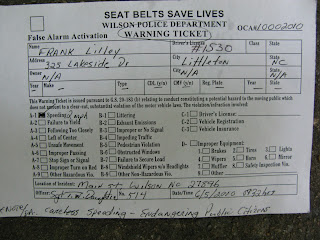 #4  Actually won an age group award in two races!!  Since I started running in about 1976 I had NEVER won an age group award in any race of any distance.  Even very small races!  But this year I broke through . . . well actually the 'ranks are getting thinner' each year.  So there is something to be said for just showing up!!
So 2010 wasn't a bad year at all.  Thinking about it now, it maybe was a pretty good year!  But 2011 is going to be even better!!
Posted by Frank Lilley at 5:38 PM 4 comments:

The advantages of an older son are tremendous:
My only really bad habit is a minor running addiction.


Now for a race report from the Kiawah Island Marathon this last weekend . . .

I first met Dave Hinshaw and Brian Wilcox at about the 7 mile point of the 2007 Richmond Marathon.  Obviously, they aren't a very discerning pair and are not good judges of character, as the three of us struck up a friendship and have stayed in touch ever since.  Dave and I later ran the OBX marathon in 2009 and Brian and I met up at Boogie in 2010 where I get my annual dose of humble pie!.

The fourth member of the this year's crew was Dave's brother, John, who was doing his first marathon!

Let's get the bummers out of the way right off!
But the big deal was John completed his first marathon!!  Now, THAT is a big deal!

The four of us descended on John's Kiawah home Friday afternoon.  For me, finally getting there was quite a relief:  1) my brand new heat pump quite working the afternoon before I left and temps were in the 20s, 2) my daughter was having a kidney stone trying to pass and 3) I had car trouble on the way to Kiawah.

Once there we went to pickup our packets and John drove us around the course.  Nice and flat!  There is nothing quite like the excitement of someone doing their first marathon!  John was actually pretty calm and cool about the coming race, but you could still sense his excitement . . . reading compulsively from some marathon guide book for last minute tips!  I loved hearing he and Dave talk about all the hints they had read!  I can't believe all the things I've been doing wrong!  :-)

We decided to cook dinner at John's house and hit the bed early for a 5 am wake up to guarantee us good parking.

Saturday -
Up a five, showers, breakfast and we headed to the race!  Since John is a homeowner we had great access and parked about a two minute walk from the start!!  NICE!

Temperatures were in the high 40s and a light rain.  About 30 minutes before the race started, the rain intensity picked up to a steady rain . . . not heavy at first, but we were all drenched the first 13 miles. 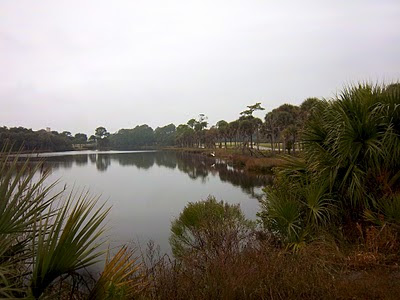 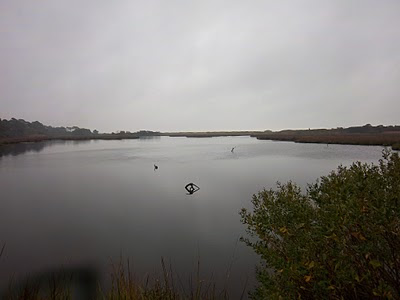 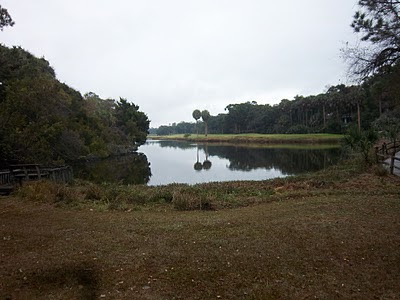 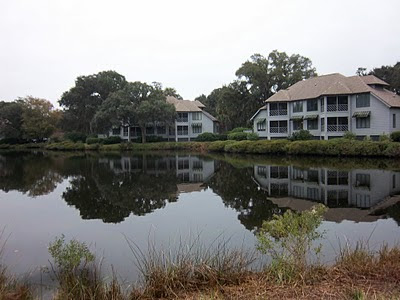 Kiawah is definitely an beautiful, upscale place.  hundreds and hundreds of beautify homes broken by picturesque salt marshes, lagoons and golf courses.  Sensory overload!  Nice course and one of the best organized races I've been to.  Everything was just 'easy.'  But a marathon is still a marathon.  None are easy.

I should have worn gloves but I didn't think it was that cold!  But at about mile 4 I picked up a pair of gloves someone had thrown down!  Sweet!  They helped a lot, but I was cool all day long!

At about mile 7 or so I met Jennifer Swain from Atlanta who was making Kiawah her first marathon.  Jennifer and I were back and forth all day and she ended up beating me by 1 second though our clock time was 30 seconds apart!

The first loop was uneventful with all the 1/2 marathoners keeping us company.  Once we started the second lap things got sparse fairly quickly.  Just after the turn, I met Carolyn Smith, a neat young pharmacist from St. John's Island, SC doing her first marathon. So Carolyn joined me running 3 minutes and walking one, while Jennifer held her running 2 1/2 minutes and walking one. and the three of us wound our way through the island.

At about mile 18 or so we caught up with Dave and John.  Had the take the expected pictures and we all continued on.  Carolyn and I soon decided to change two a 2/1 interval and we moved ahead somewhat.  By mile 22 Carolyn started suffering and fell back but Jenn and I pushed on.  Actually, Jenn pulled ahead quite far but I did manage to close the gap some by the end!

And just behind Carolyn came Dave and John . . . brother's staying together the whole way and holding hands crossing the finish line!  Very Cool!!

As I was coming to the finish, Brian joined me the the finish line and told me the news about missing Boston by 32 seconds.  I was soooooo disappointed for him but still a 13 minute PR is totally awesome!!

To celebrate, that night John took Dave, Brian and I to dinner at  'Cassique' . . . for one of the best meals I've ever had!  It is hard to imagine just how good mash potatoes can be!!  And short ribs . . . my goodness!So much fun with these three guys!