I did okay but fell short of my goal . . . but that really isn't the story of this blog.  No . . . this race was about watching people striving to get to their own personal daily limit!  Some achieved the goals they had set for themselves.  Some didn't.  But everyone learned something.

It's scary to approach your own "limit" and it HURTS . . . BAD . . . both physically and mentally!!!  The funny thing is that once you get there you realize there is still more that you could do . . . and what you THOUGHT was your limit really is simply some arbitrary point you had set and not a limit at all.

Going into a race, everyone decides their "goals" for the day!  All of us usually have as one goal . . . "To just have FUN!" or something like that!!  I'm sure its true for each us.  We do want to have fun and sometimes that's really all we want to do at a race.  But usually, in the back of our mind, we have some other goals.  Some of these we share and some we simply keep to ourselves.

If it's a distance race then the goal is almost always a time.  I guess for most people, a distance race is all they know and all they have ever tried.  So they keep shooting to get faster and faster.  But from personal experience I know the body wants to get slower and slower!!  So us older folks usually have ways of setting goals that we can achieve . . . like a "PR since an even"t like a surgery or maybe an annual goal.  Still the focus is on speed over the distance.  And there is certainly nothing wrong with that.  Heck . . . we all do it!!  It's very rewarding.

BUT . . . if the race a timed race the goals take on a very different nature that is both obvious and insidious.  Goals become distance goals or a "time of effort" goals.  And honestly . . . in my mind these are COMPLETELY different . . . a unique sort of challenge that that challenges mental resolve and perseverance more than speed.

In a distance race if my day isn't going well and I see there is no way to achieve my time goal . . . I just back off and cruise for the rest of that race.  Oh . . . I still will run and try.  But a timed race is different.  There are usually ways you can adjust to still try and do what you wanted to do!  Fix the blister and keep going, realizing its going to hurt but you can still move forward and not damage yourself really.  Or you can simply slow down.  Walk if you have to.  But you can keep going.  Guess this is also true for some of the longer distance races too . . .  but at a distance race if you miss a time cut-off your day is done and you have an excuse to stop!!

But in a timed race . . . there is no excuse.  There are no time cutoffs!  You still can move forward.  You just have to force yourself to suck it up and keep going until you simply can't go any longer.  Meet the "monster of quitting."  For almost all of is in a timed race we go until we feel like we have to quit!  Most never complete the full 24 hours.  So we all have to go through the mental agony of deciding "we're DONE" for the day.  And believe me, every time that hurts to have to admit you can do no more . . . for that day.

And there is another unique facet to a timed race . . . the curse of the minimum goal!!!  I'm not sure everyone does this but I always have a "low bar" minimum goal.  Something that I'm fairly sure I can do . . . a minim level of respectability given my situation going in to the race.  Like for the VA24 . . . my minimum goal was 50 miles.  Was pretty sure I could at least do that!!  (Really sucks when you fail to achieve that minimum goal!!  Hahaha!)

So timed races are really a mental challenge.  VERY few participants are still moving forward at the end of a 24 hour race!!  So everyone else has had to face the mental challenge and reached their own person point of their "limit" that day.  How much suffering they could take?  How mentally tough they were?  How much they were willing to push themselves?  To what lengths they were willing to go to avoid the inevitable "monster?"

At this year's VA24, I was on a team of 12 runners (Team Off-some)  . . . each trying to reach their own personal goals plus support the team by doing all they could do individually to help.  Everyone on the team team met "the monster" in that none of us kept going the full 24 hours.  And some didn't achieve that distance goal they had hoped for.  And when you stop and think about it, the folks still running at the end really haven't reached their limit yet!!  They were still going!  Hahaha!!  They NEVER had the chance to meet the "monster of quitting!!"

But to a person, this team ROCKED!  Talk about gutsy efforts . . . Team Awesome kicked ass this weekend!  Every single person gave it their all!  And they were smart about it!  Individual distances ranged from maybe 7.5 miles to over 78 miles and there is a story about each and every one!  Each was honestly amazing and inspiring!  Yes . . . even the 7.5 mile effort!  And two teammates that had to drop out before the race, came to support the team anyway!  One young lady had a broken foot and is in a protective boot . . . but still came to the race anyway and crewed the whole team!  The whole time!!  Plus, even walked three loops of the 3.75 mile course!!!!!  She really inspires me!  I want to be like her when I grow up!

Each of these folks pushed and pushed their own daily limits.  There is one of our teammates I'm praying didn't push too hard and cause serious injury (guess we'll know for sure in a few days).  But each and everyone push and pushed . . . and met that monster!!  I am so proud of each and every one and feel luck to have been their teammate!  You simply have no idea how tough these folks are!!
Posted by Frank Lilley at 8:31 AM No comments: 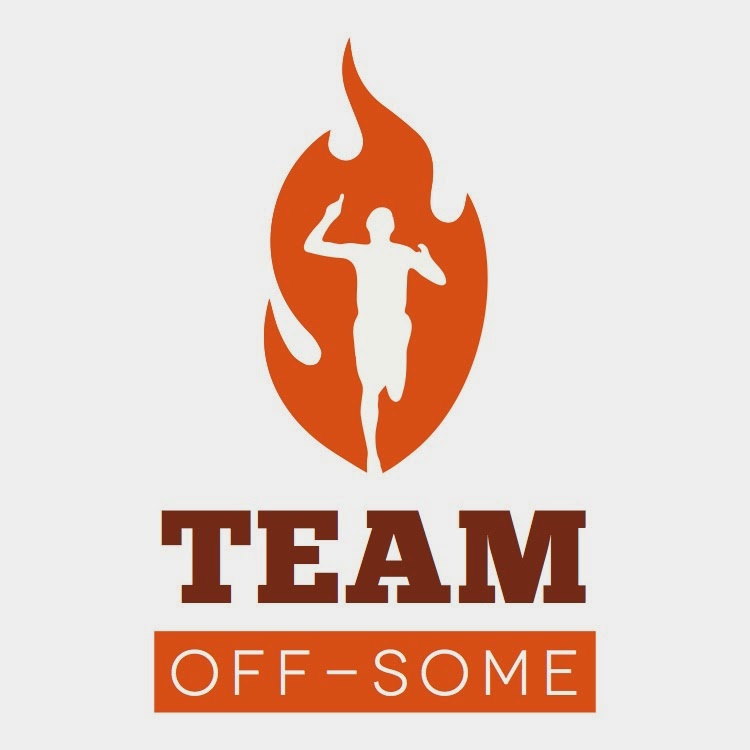 Team Off-some is the perfect name for this group of  runners!  Yes, every single one is challenged in multiple ways!  First and foremost, each and every member is quite frankly just plain strange!  I mean . . . who really runs just for fun?  And if maybe you find someone who does just run for fun . . . three miles is plenty!  Anything further is . . . well . . . off-some!

There are some team members that have dreams of covering more than 100 miles with the 24 hour time limit.  Obviously these people REALLY are off-some . . . they're just not right!  Why on earth would ANYONE want to do that?  I mean REALLY . . .  Bless their hearts . . .

Other team members have other, less off-some goals . . . some plan to strive for 75 miles!  Why?  I have no freakin' idea!  Others hope to complete 50 miles . . . the minimum distance to get an award!  Okay . . . I can kind of understand that.  At least they will hobble away with something more than a t-shirt!!  Probably will give them some bragging right around the house or something.

And we have one team member who has a freakin' broken foot and can't do the run.  So . . . what does this little idiot decide to do?  Why she wants to come to the race anyway traveling a zillion miles just help out everyone else!  Talk about "challenged!!" She just may be the most off-some member on the team!

While each team member has a running goal . . . some have decided to embrace the race's goal of raising money for the American Cancer Society.  Right now as it stands, Team Off-some has raised $ 2,698 that I know of!  And there is probably more raised that I haven't heard about yet.  Heck . . . I'll add $2 more just to get it to $2,700!!
Posted by Frank Lilley at 6:45 AM 1 comment: