Another year almost done . . . seems like the years are going by like pickets on a picket fence as you run by . . . and I'm pickin' up speed!  As a kid I remember a year just took forever it seemed!  Guess I'm not a kid anymore!

Well, 2009 is just about done and overall it was a good year . . . everyone is healthy and happy and we have many blessings.  You really can't ask for more then that.  And I finally moved to a new age bracket . . . the 60s!  Luckily my friends were there to help me "ease" into it! 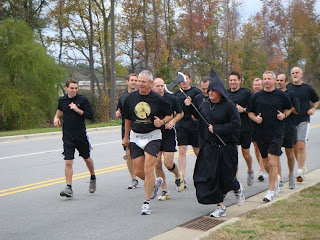 From many perspectives, 2009 was very, very tough.  I have many friends that have lost their jobs. And good, new jobs are just really hard to find.  Got to admit I am not very optimistic about the economy for 2010 and 2011.  To stimulate jobs, seems to me we need to provide incentives to the companies that provide those jobs.  Current Obama/Congress stimulus efforts are just very expensive and not properly focused for long-term economic growth.

For me and my running, 2009 was both successful and troubling.

First, I had one major goal for 2009 and one minor one.  My major goal was to complete a 50 mile run. This I completed on March 21 and raised money for the American Cancer Society.  The 50 mile run took me 13 hours and 44 minutes.  Not a very good pace, but I certainly didn't try to hurry!  Got to admit this was a huge accomplishment for me and I am so glad I did it.  Also, my minor running goal was to complete 12 runs of 26.2 miles or longer . . . and I got 13 in during the year:
Other notable runs:

For several years I've really enjoyed running . . . not worring about time, but focusing on the experience . . . having a really good time.  But time is becoming more important to me!  Yes . . . I said it!  Throughout 2009 my times got slower and slower.  To the point that now I'm having to worry about cut-off times!

In the Umstead Trail Marathon I was the last official finisher.  And now a 6 hour limit could be a problem if the marathon course is hard.


Additionally, I've had several marathons that proved to be very hard just to complete: 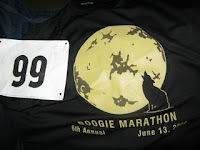 I've got to changes things up or I'm afraid I'm just going to get slower (if that's even possible!) 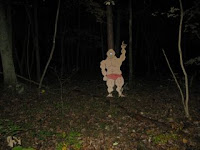 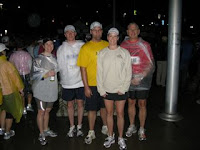 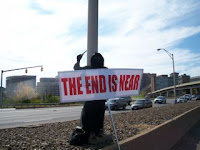 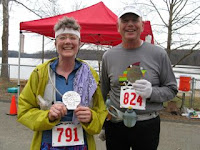 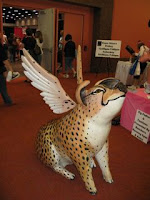 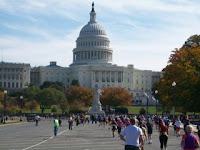 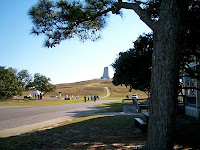 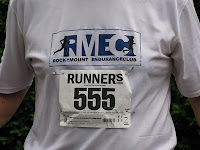 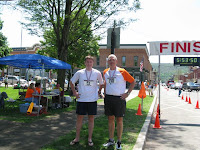 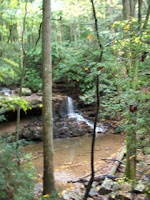 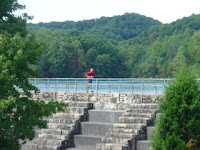 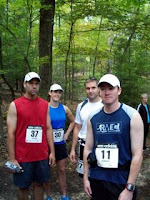 I wonder if Charlotte always has cold weather? In 2008 the temperatures started in the 20s and never got warmer then the mid-40 (best case!) and no wind. Ditto 2009! 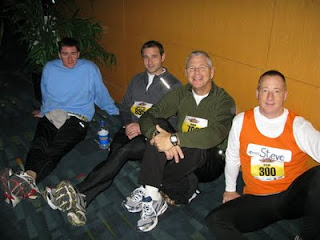 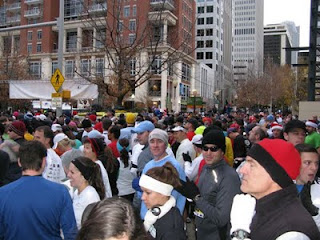 Joining me were Eric Pate, Steve Cooper, Ron Fleming and Dave Lavely. Well, actually Dave was there and ran the race, but we never saw him as he and his kids were spending time with his sister and her family. Eric and Ron were fired up to run hard. Steve Cooper was coming off a nagging calf problem and really should not have run the race . . . but he wasn't going to miss it! So he decided to hang back with me and just have a good time. Unfortunately, I forgot to charge the battery in my camera, so I didn't get many pictures :-( 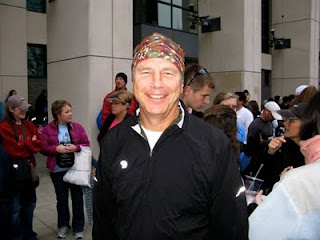 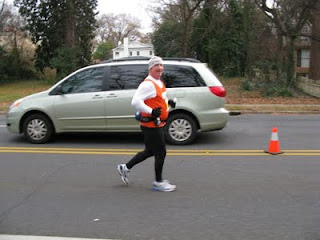 Steve and I did have fun! We took it very easy and just enjoyed the run.

The first half of the Thunder Road Marathon is gorgeous! We wind through a series of beautiful old, stately neighborhood. Really beautiful! And plenty of hills! Once the half-marathoners break off, the course loses the beautiful neighborhoods! By mile 18 or so, the fun always begins!

As we got to about mile 20 we heard someone coming up behind us fast! Real fast! As he passed up I recognized it was Jonathan Savage! Jonathan had paced the 4:00 group and had decided to run another 10 miles or so! Amazing!

Even near the end of the day, the neighborhoods were supportive and loud! Really nice! Last year I went to Charlotte expecting very little and was VERY pleasantly surprised! The first half of the course was beautiful, loved the NASCAR theme, complete with several race cars parked along the course. Nice medal, nice shirt, great volunteers and a very welcoming city!

In this year's Thunder Road Marathon a few things were better then last year and and two that definitely were not!

On the positive side:
But there were disappointments!
But still, it was a fun day! Eric AND Ron both set a PR and this hilly course! Dave cruised to another sub-4 hour. Steve and I finished . . . still smiling!
Posted by Frank Lilley at 5:03 PM 2 comments:

Most of the folks I heard from were supportive . . . supportive of me trying to commit suicide by running the 50-miler. I told Amber Poole that I thought she would have said "go for it" if I had said I was considering running 300 miles around a 100 foot circle in Death Valley in mid-summer!

But Dave sent me a detailed e-mail on how he thought it might be possible for me to do this. Then he said the deciding thing, "I say to register for it and give it a shot. Whether you finish or not, at least you'll know you tried. " That struck home for me.

So I have sent Doug my entry.

Wouldn't it be great to have a bunch of friends there too? You bet it would! If you decide to try this (marathon or 50-miler), I can promise you it will likely be one of the hardest marathons / 50-milers you've ever done. But I also promise you this one will make you proud you did it! It's Hot! It's Hard! But it's also very, very Cool! Please come and give this one a try! I promise you'll be glad you did!

Twice now I've run the Boogie Marathon. And both times the race won. Sure, I finished both times, but it was ugly . . . really, really ugly. My experiences haunt me.

For those of you who might not know about the Boogie Races, it is not an event for the faint of heart. There is both a marathon for the runners and a 50-miler for the crazies. The course is VERY rural and is shaped like a balloon on a string. The balloon part is a six mile loop and the string is a 2 mile out-and-back for a 10 mile course. The marathon does two loops plus the balloon. The 50-miler simply does 5 loops.

Then, there are the hills! The balloon has a lot of smaller ups and downs that seem to get steeper and longer with every loop. The "out" part of string portion is down Bethel Hill and the "and back" part is up this sucker! Believe me, this is tough.

The race waiver says it all:
WAIVER AND RELEASE:
I realize June in North Carolina is hot and humid. Most people and doctors advise against running in heat and humidity. Also, running at night presents special problems such as seeing where you are stepping and watching out for cars. I understand that this area has specific hazards such as rattlesnakes, copperheads, polecats, wildcats, and rednecks who like to drink and drive and throw things. I know that 26 miles can be tough under any conditions but with the possible conditions in this event 26 miles could turn out to be much more of a challenge than I expected. Nevertheless, I like to struggle and really, really want to participate regardless of the expected pain or risk. Therefore, I want everyone to know that I am not being forced to do this event and that I agree for myself and any survivors or possible claimants that I may leave behind, to save, release, and keep harmless the Mangum Track Club, its members, the Runners From Hell and any volunteers or sponsors or any other helpers that may be involved with this event from all liability, claims, or demands for damages incurred by participation in this event or any of its parts. I assume all responsibility for my participation and certify that I am properly trained, mentally fit, and medically able to participate in this hot, hilly, and possibly night marathon. I agree to use a light after dark. I will not litter. I will not kill snakes. I am aware that this event is limited to the no more than 75 entrants and that registration may close abruptly at the race director's discretion. I realize that the race director's {or his delegate} authority is all encompassing and will abide by anything he tells me. Knowing everything in this waiver has not deterred me from entering this event and my signature below indicates that I have read and agree to all this stuff and still intend to participate. I also promise to have fun.

So . . . for two straight years the Boogie Marathon has kicked my butt. This last year was especially humbling. I truly wanted to quit . . . after only 10 miles! That's right! One loop and I was done! I did keep going and struggled through all 26 miles, walking most of the way. After a few day recovery I pledged to myself that this next year I would beat Boogie!

So now registration is open. Time to commit! Am I going to do all the training necessary to run Boogie and feel like I did well? Honestly, right now I'm not sure.

But I've printed out both waivers . . . one for the marathon and the other for the 50-miler. I'm sort of thinking that since the marathon beat me twice, maybe I should just declare it the winner and sign up for the 50.

But right now I'm not sure how I could do it! I've only run 50 miles once. And the course I ran was fairly flat. REAL flat compared to Boogie. And the temperatures were cool . . . actually cold. I wore gloves all day! A far cry from Boogie weather!

The race director (Doug "Boogieman" Dawkins) says you must finish the first 40 miles by 4am. That would be hard for me . . . especially if the weather is "normal." But if the weather is a little more cool . . . maybe I could make the cutoff.

I'm all about challenging myself. But is this too much? I don't know. I've got to decide.
Posted by Frank Lilley at 6:15 AM 7 comments: