On August 22 we will have the second annual Medoc Meltdown 50k and Fun Run.

The Meltdown is what is know an a "Fat Ass" run . . . no fee to enter, no official timing, no support. Just some great people coming out for a run! The only "non Fat Ass" thing is that we do print special race t-shirts for any who want them . . . $10. 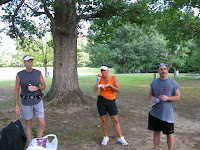 The run is held at Medoc Mountain State Park in Hollister, NC . . . about 30 minutes north of Rocky Mount. While the park officially opens at 8 am, we believe the park will open early for us, so we plan to start at 7:30 am or so. 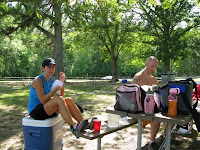 The course will follow the Medoc Trail Marathon course . . . 8.7+ miles per loop. 3 loops is a marathon. 4 will be just under 35 miles. Run / walk as much or as little as you choose! The course is a figure 8, so you pass home base (Picnic Shelter) at about 3.5 miles and then 5.2 miles later at the end of the loop. Medoc Trail Races web site has information about the park and the trails. ( http://www.medoctrailmarathon.com/ ) The Park does have excellent camping and showers close to where we start.

Everyone is welcome. Come run. Come walk. Go as far as you like or as short (minimum is a 3.5 mile first loop). Just bring your own coolers, gels, snacks, etc. 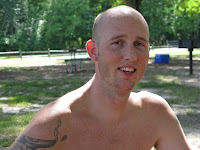 All I ask is that you let me know your coming by sending me an e-mail ( flilley@embarqmail.com ). Also let me know if you want a shirt and your size.

Pictures are from last year's race and this last one shows last year's shirt (what a handsome model!!). This year's shirt is already designed and I promise will be VERY cool (as in neat looking!)! 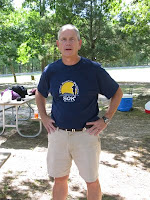 Posted by Frank Lilley at 5:57 PM No comments:

Umstead on the 4th

What a great way to spend the 4th of July!

This year's Sweaty Butt 50k at Umstead Park in Raleigh didn't "show all its teeth" . . . but even a relatively "easy" day at SB is a tough run. This year the temperatures stayed in the 80s and the humidity was actually fairly nice. But all the usual rocks, roots and hills were still there. 100% single-track trails! 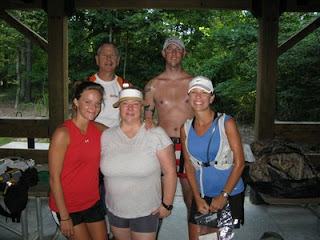 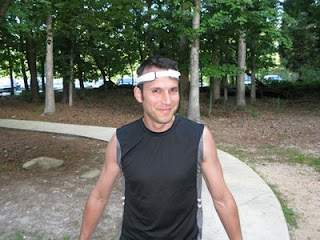 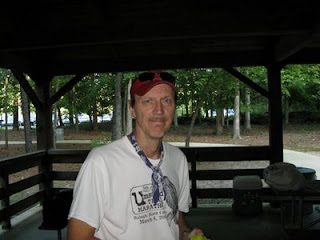 30 of us gathered at the shelter near the Harrison Road entrance to the park. After everyone got their drop bags and coolers squared away, Mike Day (the run organizer) gave a short pre-run briefing and we all headed off for our run.

Only a few of the hills are steep and none are long climbs, but Umstead Park will get you! I was surprised at the sheer number of people our there for a walk or run. All morning you were rarely alone. Bet I saw 50 people out walking their dog/s. Not sure how many people were out on the trails we were running, but there were plenty. I love to see people outdoors enjoying themselves.

I came out planning to run 21 miles but was thinking I might do the full 32 miles. (the Sweaty Butt is three loops of about 10.3 miles per loop) Lap 1 went easily. Ran the first 5 miles with Stephen Lily and Jeff DeFour and his daughter Chelsea. Jeff and Chelsea were planning to do a single lap and Stephen was going to do two since he is going to run the Grandfather Mountain Marathon next weekend. For the first 5 miles we all stayed together, catching up and just have fun with each other's company. Near the aid station, Stephen moved out in front of our group and slowly pulled away. After the aid station, I also picked up the pace some and went out by myself.

Lap two started getting hard after about 3 more miles. I kept doing my usual walk / run, here walking the hills and running the flats and downhills. But Umstead started to win! I just "ran out of gas" . . . But I was still having fun and enjoying being out there.

Saw two snakes today - both small brown snakes . . . like ring-necked snakes without the ring! Not sure what they were. 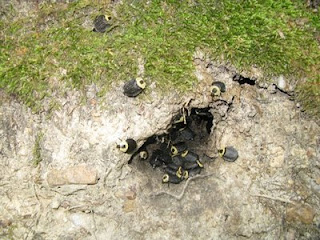 Also saw the weirdest nest of bugs. I saw what I first thought was several bumble bees flying around a hole . . . but on closer inspection I realized these were really beetles! When flying I would swear they were bumble bees!

The winner of the 50k passed me as I was maybe a mile before my second lap ended! He was flying! I kept waiting for the second runner, but they never showed! Since Connie was coming up to the lake for the 4th, I had to leave before everyone finished. 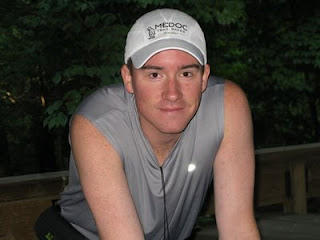 I especially wanted to be there when Ron Fleming finished his first ultramarathon! I saw Ron as he was maybe 2 1/2 miles into his third lap. He said the heat wasn't getting to him, but the hills, roots and rocks were taking their toll! Ron called as I was on the way home to tell me he finished! A hard but satisfying day! Welcome to the "dark side" Ron!

Special thanks to Mike Day and family for putting this even on. The Days did the planning, manned the aid stations AND had ice cream and Popsicles for everyone!