You know I'm not talking about myself!

Today, we're talking weather! And 75 degrees is NOT smokin' hot during the summer, but for a long run on December 28th, that's pretty frickin' hot!

Races just didn't line up too well during the Christmas season and there was just too much time between the Thunder Road Marathon on December 13th and the Frosty 50k on January 10th. So, I needed to do a long run. Unfortunately, I chose today!

Couldn't bring myself to get up too early, so I headed out at about 9:30 am. Actually I felt really good for the first 14 miles or so. Winds were really high and I knew it would be easier to be heading into them to start . . . but they where to my back for the first 4 miles. But after about 9 miles and heading back to the southside of the lake, I still felt good. Winds were bad across the Eaton's Ferry bridge and the hill up was tough. But I was keeping a fairly good pace.

Once to the top, I picked up a bottle of Gatoraide I had dropped and headed over to Eaton's Crossing and those hills! They kicked my ass. Then, into another subdivision and I was dragging. Survival shuffle back to Eaton's Ferry Estates and my house.

We all have good days and bad days. Clearly, this wasn't a good day! But the question is why wasn't it? I had had two weeks rest from my last marathon. Should be plenty of rest. Was it the temperature? Maybe . . . but 75 degrees isn't all that hot!

Some days are just great!

Let's face it runners . . . some days are better then others!

We've all had them. You're feeling good, weather is nice, but for some reason, it's not a great day. Other times, you're not all that excited to start, but the run ends up being great. Today I was really excited to run, as I had to miss the last three days. Weather was perfect for me, overcast and 45 degrees or so. Was expecting rain but it never came. But for some magical reason, everything felt perfect. I limited myself to only 13 miles, but I wanted more! I felt great from start to finish. It's days like this that keep me going. Suffer through the hard days and enjoy the good one!
Posted by Frank Lilley at 2:45 PM No comments: 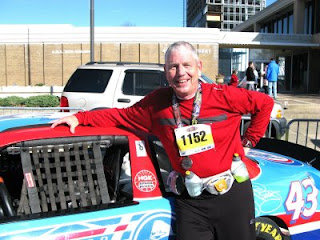 I did it! 12 marathons in 2008. A marathon a month. It was a good goal . . . achievable, simple to state, understand and remember. And it sounds hard.

But when you get down to it, it's really not that bad. All it really takes is a desire to do it and a little luck on the injury front. Heck, a friend of mine, Doug Dawkins, just finished his goal . . . running across the US from Atlantic Beach, NC to Mission Beach, California. 122 days covering 2,700 miles. That's averaging over 22 miles a day and he didn't run every day . . . he took some days off!

So a marathon a month really isn't all that much. But considering work and everything it wasn't bad!

The only really hard part was deciding to still try for the goal after getting sick. On August 8th I got sick (night before James and Cheryl's wedding) and couldn't start running again until September 27th. 7 weeks is a long time and I lost a lot of fitness due to both the lack of running and the sickness. When I started back, 2 miles was a struggle . . . but I built back up and decided to attempt the OBX marathon November 9th and see how it would go. If I remember correctly, my long run was 15 miles in preparation.

While I did struggle, things when fairly well, so I started thinking about the goal again. The next weekend was the Richmond Marathon, and I decided to give it a shot. While I worried about "back-to-back" marathons, it really proved to not be a factor all. Did "back-to-back" marathons again December 6th and yesterday . . . again, not a problem at all.

My favotite? Hard to say. Loved Boogie, Capon Valley, Richmond, Medoc and surprisingly Charlotte. Looking at them, they either were a unique / different event (Boogie, Capon Valley and Medoc) or well done with an interesting course and good support.

My least favotite? Country Music by far. Though it was really neat running that race with James as his first marathon. Really surprising since this is one of the Rock 'n Roll events. Lot's of areas they should do MUCH better (parking, shirt, medal, finish area, and the second 1/2 of the course was terrible!)

Best medal / award? Guess I'm biased somewhat (!) but I think the Medoc medal is #1 followed by Charlotte. For me, this is a good place to show creativity and spend a little money.

Least favorite medal / award? Well, Capon Valley gave nothing at all! Nor did the Sweaty Butt 50k. But the Boogie marathon gave a ceramic coffee mug . . . with the race info scratched on the bottom! Totally worthless! I think a marathon deserves a medal. Period. No mugs, No glasses, no belt buckle. Medals. (Guess "fat ass" races like the Sweaty Butt get a hall pass here, since these are put on by one or two individuals and there is no entry fee.)

Best shirt? Capon Valley, Medoc Charlotte and Boogie were all really great designs. Just wish race directors would forget the technical shirts and go back to 100% cotton. And a fall marathon shirt needs to be long-sleeved cotton . . . no exception. But, Capon Valley wins! Very different and no ads!

Worst shirt? No competition here at all! This shirt was by far the WORST I've ever seen or heard of! Myrtle Beach . . take a bow as the race with the worst taste!

The Re-run was a blast!

To me this is what running is all about!

Probably 35 folks showed up on a cold Saturday morning to participate in the Medoc Re-run. For those of you that don't know, this run was a chance for those of us that worked on the Medoc Trail Races to earn a medal by doing either the 10-miler or the marathon. Also, anyone else was invited too! If you just couldn't make it to the real race, or just later decided to come. Anyone was welcome!

Probably 30 folks opted for the 10-miler and five of us chose the marathon.

The first part was truly crazy . . . soooo many people got lost &/or turned around. I met probably 6-10 folks going the wrong way! Passed Brad Wiesner and Kevin Boudreau probably three times!! And they were trying to do the 10-miler!

The whole day was social . . . not a race at all! The five of us doing the marathon met up after each lap, just having fun, taking pictures and trying to keep warm! William, Levi, Tom, Dave and I had a BLAST!

Tom twisted his knee a little and so he and I just cooled it . . . running some, walking some and talking a ton! Heck, we ventured off the route to explore! No time worries at all!

Running was tough with all the leaves. I took 5 falls . . . one I got a 9.7 for style, but the rest were just thuds!! Hard falls but not cuts! Just each time it scrambled my brain a little!

But I finished and that makes 11 completed and one to go!!

Oddly enough I'm really sore after Medoc. I'm surprised! Actually when I finished the 26.2 I considered going for another lap (34-35 miles) but I was just too cold and the last lap had taken too long. So why am I sore??

My plan is to do the Charlotte Thunder Road Marathon this coming weekend for 12 marathons in 2008. Hope the soreness diminishes before then. Otherwise, it would be the Jacksonville, FL Marathon the following weekend. A long drive!

We'll see. But the Medoc Re-run was a blast!
Posted by Frank Lilley at 5:16 PM No comments: