As you would expect, the mobility of my foot and ankle suffered greatly through the 10 weeks on inactivity due to the dislocations and then 6 weeks in a cast on crutches.  So I have a long way to go the get back my flexibility and a full range of motion.  But I am starting to see progress likely due to my physical therapy . . . Elaine Weisner has been great.  Lots of different exercises and things to try.

Both the swelling and the discoloration have improved marginally.  I can see and feel a difference but both remain.  Elaine has given me several things that hopefully will assist here.

Pain on the bottom of my foot continues with virtually no improvement.  That's a little discouraging but honestly the pain is just a 2 or 3.  I can deal with that . . . though it would be nice to leave the pain behind!

Over the last three weeks I have been working on my overall fitness and here I am definitely seeing the most progress.  I started swimming.  My first swim kicked my butt!  I could only make it about 25 yards and I was totally out of breath.  I rested and swam another 25 yards!  I was DONE!

Now I swimming maybe 1,000 yards or more and only resting a little.  It was really cool to see the quick progress!  Made me feel a little better about myself!

I'm also doing other exercises and progressing there too!  So I'm feeling much better about myself finally!

I have done several ~1 mile walks and tomorrow I will be doing even more as I mark part of the Medoc Meltdown 50k course!  I'm excited to see how my walking progress is.  Even if the doctor said it was okay, I don't believe I would be running quite yet.  But once he gives me the "green light" I plan to start testing the waters.  But I'll have to watch the pain pretty closely.

With the Meltdown, I'll be spending a lot of time on my feet so this will be a GREAT test!

After over a week on gout medication there is no noticeable change in my foot!  Still swollen and discolored.  No better but no worse either!

My doctor says my uric acid level is high.  That seems to mean this MAY be gout.  But it is not proof that it is.  And he feels like the medicine I've been taking should have had an effect by now if it was gout . . . but he still wants me to continue taking the gout meds!

So honestly he really just doesn't know what's wrong.  So he is sending me to physical therapy!  I guess this makes sense!!

But I'm thinking it is getting close to time that I take over responsibility for my recovery.  I won't do anything crazy  But I'm going to really listen to all the aches and pains and figure out how to get back into walking . . . and then running.  I have a way to go.  But right now I'm just sort of stuck at wherever it is I am in my recovery.  Time to move forward.

And speaking of moving forward, I have begun exercising and I can already see positive differences!  Very exciting to me!

Also I'm doing crunches, various leg lifts with resistance bands, and arm exercises.  Have to be careful as my left wrist is now healing since I'm off crutches.  And I really can't use my toes yet.  So things like pushups and planks will have to wait.

So at least I feel like I'm moving forward rather than backwards.  And soon I'm hoping I'll be walking for actual exercise!!
Posted by Frank Lilley at 6:56 PM 1 comment:

Maybe I shouldn't call this "My Bucket List!  It's really just simply things I want to do!  And since this blog is supposed to be focused on running it would make sense for me to keep things centered there.

So following the Stephen Covy approach with dealing with the "Big Rocks" first and then fill in with lesser important things . . . here are my two "Big Rocks."

Thru-hike the Appalachian Trail
One thing that has been on my list for years and years and years is to thru-hike the Appalachian Trail!  Back when I was in high school I first learned about the trail and hike a little of it and it was love at first sight!  In college I helped maintain a trail section and enjoyed that.  Quite frankly I read everything I can find about the AT and always have.

In the past I just wanted to make my thru-hike an un-hurried adventure taking 4-6 months.  Literally stopping when I wanted to stop.  No rushing.  No schedule.  Just enjoy the hike.  But now I'm re-thinking this some.  I might just try and see how fast I can do it!  Not sure . . . but thru-hiking the AT is one of the highest priority goals I have.

The Last Annual Volunteer State Road Race
The next goal that I've set is to complete The Last Annual Volunteer State Road Race held in July of each year (yes . . . every year is "The Last Annual . . .").  This is quite a challenge.  The race is 314 miles, starting in Missouri, crossing the Mississippi River and entering Kentucky for about 10 miles.  Then, you cross into Tennessee and go diagonally southeast.  Tennessee is a loooong state!  Cross over into Alabama for a short while and finish up in Georgia!  You have 10 day to finish which equals a 50k each day.  Sounds easy.  Try it!  Oh . . . and I forgot . . . there is no aid provided!  You are on you own!  You simply can't imagine how much no aid and no crew add to the difficulty!

I was scheduled for Vol State this year . . . but had to pull out due to my foot issue. My training had been going extremely well up to my accident and it was my focus race of 2013.  This is simply unfinished business.

My problem is these two things are the two big things on my list but realistically I don't think I could do both in the same year.  If I did the AT thru-hike I would probably start in April or May.  Not sure just how long it would realistically.  The AT distance is constantly changing as trail relocations take place but it is about 2,180 miles or so.  If you could average 20 miles a day that would take 109 days so if I started May1st I would finish around mid-August.  So Vol State would be out until 2015.  And if I decide to do Vol State, there really isn't time to do the thru-hike.

So basically I need to decide between these two goals.  I'm not getting any younger!

Then there are lots of things of lessor importance.  All the "Little Rocks."  These are not in any special order . . .

Things are getting better . . .

But the ride back up is definitely not a smooth one!  Ever since about a day after I got my cast off the surgery foot has been all swollen and discolored . . .  plus it just continues to hurt!!  And not just were I had the surgery . . . the whole freakin' foot! 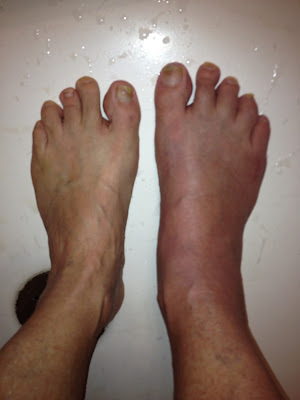 Actually, the "hurt" is lessening and I can walk some . . . maybe a couple of hundred yards or so.  But this "recovery thing" isn't going quite like I planned.

I've never had "gout" before so I really don't know quite what to expect!  The doctor said sometimes gout is REALLY, REALLY painful . . . like if someone even "looks" at it it hurts!!  Mine isn't like that at all.  It hurts but the hurt is very manageable.  I have some pill now so hopefully they will knock this shit out quickly!

But at least I've started back exercising.  I can't do a lot of things yet, but there are some things I can do!  Crunches, resistance band lifts from many directions, curls, etc.  But things like planks, puchups, etc. are out.

One thing I never mentioned much about was my wrist!  When I fell from the ladder a screwed up my left wrist!  I think that injury is what made using the crutches so hard!  But now that I'm off crutches, the wrist is starting to heal.  But things like pushups are in the distant future for me.  Heck . . . when I'm on the floor and need to get up it is a REAL ordeal!  Just barely can . . .

I also need to develop a "Lilley-style" Paleo diet that maybe I can live with.  Trying to do some research but a lot of the recipes I'm reading just suck!  A "smoothie" with coconut milk, hard boiled eggs, pork rinds (I actually should probably like them but I don't!), Raw veggies /w guacamole . . .  I'm sorry but I'm not willing to live like that!  So I've got to adapt something I can live with but I really don't know where to start.  Got to figure this out!!

Some really good news . . . I am now officially out of my cast!  And the pin is out of my toe!

Huge step for me!  And I'm really excited.  The cast removal is nothing and the removal of the pin from my toe was 100% painless!  Honestly!  Want to see it removed??

But the news wasn't 100% positive.  My doctor said he was a little disappointed in how straight the bone alignment was.  He had hoped for better.  But . . . like he said . . . God does it right and he just tried to get as close to that as he can!!

Looking at it now there doesn't appear to be an issue . . . for instance the toe isn't just sticking out to the side or anything!!  It really looks good to me!

But Dr. Purvis worries that if I try and do too much it could just slip back out of place.  Not a good thing for sure!

So my directions are to just keep everything to simple walking around . . . no fitness walking at all for the next 3 weeks.  And no exercises that would cause my toes to bend (pushups, planks, etc.).  He is hoping that in these three weeks scar tissue etc. will develop to hold everything together and in place.

I'm good with that!


Posted by Frank Lilley at 4:31 PM No comments: