Sometimes you just have to show up . .

No doubt about it, I'm a slow runner!  I try.  I train . . . sort of.  But I'm the president of the "Back of the Pack Club."  And it doesn't upset me calling our club meetings to order in a marathon or ultra.  Quite frankly it's fun!

But every so often I get this weird feeling inside.  One I don't get very often.  Competitiveness.  And not just competitiveness with myself and my past times.  I want to outrun somebody . . . anybody!

When I run those longer distances, I need to simply drink a beer and go take a nap . . . the feeling will pass.  First, there are just too many really good 60+ runners out there.  And they all show up for these marathons and ultras.

OK . . . I haven't gotten my speed up where I can really be competitive, but for right now it sure feels good passing people!  And the perfect format for making me feel competitive was yesterday's Skirtchaser 5k in Raleigh!  A race of over 700 folks!

The format plays right into my hand.  The women start the race first.  The men have to wait 3 minutes, then we start.  Now . . . three things happen (all of which also work to my advantage!).  First, the women that are planning on walking the 5k are starting in front of me so I get to pass them like they are walking!!  Second, many of the women run the first part of the race slow so their partners and friends can catch up to them . . . ahhh more passing!  And third, some of the women intentionally hang back just to have fun with the guys!


So . . . at yesterday's race I started passing people early and kept passing them the whole way!  I was smokin'!!  Truth be known, probably everyone I passed was either a walker, a first-time racer or a very new runner!  Still . . . I passed them!

"Hey Michael!  This is my big chance!  I'll never get the chance to beat you in a race again!" Thank God he's running with his kids, or he would smoke me bad!  Still . . nice to pass someone!

How can it be that girl is ahead of me?  I should be WAY ahead of her!  I can beat her. 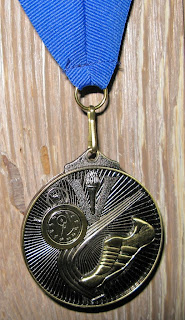 Hi!  My name is Frank and I am an addict!

It's been obvious really for quite some time, but it is time I faced it . . . head on.  I am addicted to long distance running.  And that is not a good thing!

Running itself can and even used to be an addiction of mine, but like a drug addict may move from crack to heroin, I too have moved up the addiction ladder to more, and more powerful stimulants.  Early on I loved running and racing 5ks and 10ks!  Several of us would travel around the area developing our collection of shirts and PRs.

One of my goals was to run a sub-20 5k.  I came close often but never was able to break into the teens (20:01 was my best!).  I don't really believe I followed any structured program to improve my times, but I did speed work often . . . and endurance really wasn't much of an issue.

My movement up the addiction chain began quite simply.  After our regular noon run at the Y one day in 1982, someone came up with the brilliant idea of training together for a marathon.  Almost everyone jumped on board, and so we trained for a fall marathon . . . NY for most but Marine Corp for me.  My goal was a sub-4 hour marathon.  Looking back on it, had I achieved that goal I probably could have quit right then.  But that didn't happen.  So I had to do another one, just so I could meet my time goal.

After a bunch of years lost running due to poor medical advice, I finally started back running . . . and I just HAD to run a marathon to know I was "back".  Then I did another marathon, then another.  After a bunch of marathons, my friend Cam Kelly turned me to the "dark side" by convincing me I needed to try a 50k.  Another step up the addiction chain.  Ultra marathons.

But the real problem comes by "mixing" my long distance running addiction with getting older.  I'm slowing down as I get older.  Plus, I slow down to finish the longer distances I run.  And running slower just brings on more slower running.  I walk more.  And then, it just becomes easier mentally to walk again.  And again. And again.

But I am repenting . . . somewhat.  This coming weekend I've entered my first 5k race in 15 years!  I've been "trying" to do some minor speed work but that just plain hurts! I'm stuck running basically one speed!  Slow!  When I try to pick up the pace I go anaerobic within 1 minute, and my lungs explode after 2 minutes!  I have no idea what my 5k pace should be!  Honestly!  I think I'll try to go out at a 9:00 pace and just see what happens.  I'm just hoping I can finish in under 30 minutes!

All I remember is 5ks hurt!

Will this break the addiction? Probably not . . . but it is a step.  Wonder if there is such a thing LDAA . . . Long Distance Addicts Anonymous?  If any of you know of interesting 5k race  around here, please let me know about them . . . my computer can only search for races of 26.2 or further.
Posted by Frank Lilley at 2:01 PM 3 comments: