Medoc is really pretty this time of year.  Can't help but love the spring!  Wild azaleas blooming!   Tons of wild flowers.  I have no idea of their names but they sure are beautiful!  Even saw this wild ginger growing! 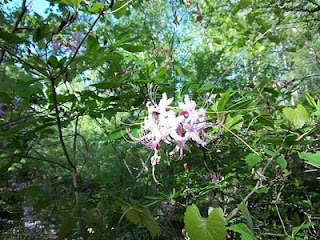 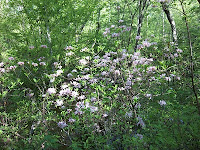 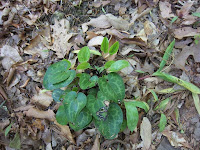 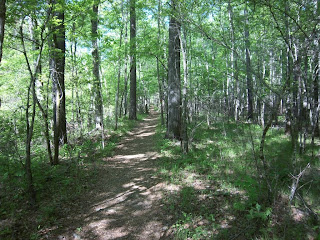 This coming weekend I was looking for a race.  The Blue Ridge Marathon is being held but couldn't find anyone willing to make the trip.  The Promise Land 50k is also going on but same thing . . . everyone had something going on.  So I'm thinking this Saturday morning will be the "Medoc Pre-May Endurance Run."  Not sure exactly what the race distance will  officially be.  Also, not sure exactly when the gun will fire (probably around 8am),  Plus, the only way to know for sure what the course is would be to run with me,  Run ahead and I'm betting you'll miss a turn!  Two laps for sure . . .maybe more!  Come enjoy the beauty of Medoc Mountain State Park with me!
Posted by Frank Lilley at 4:36 PM 1 comment:

The Good and the Bad

After this last weekend's failed 100 mile attempt, I've been considering what worked well and also what went . . . well . . . not so good!  I'm not being negative about my DNF.  Quite frankly, being honest, I really had a good idea that 100 miles wasn't going to happen Saturday.  Too many things weren't going right.  But this was the only weekend that I could really "give it a go."  If not this weekend, I would have had to wait until fall.  Turns out I will have to wait till fall anyway!!  But this way, I learned quite a few things!  I may have failed but I'm glad I tried.  Like Jimbo said, "Any DNF is better then a DNS!!"

This was a great experience, even if I wasn't successful.  I learn a lot that should help me if / when I try this 100 mile thing again!
Posted by Frank Lilley at 8:00 AM 2 comments:

I'm such a rookie at these ultra runs.  Plus, I'm just not very bright.  I got a lot of good advice from experienced 100 mile finishers.  Lot's of great tips.  Plus, one bit of fairly consistent advice . . . start out slowly, very slowly.  Slower then you think you should.  REALLY SLOW!

At the end of 5 miles I was about 20 minutes AHEAD of my goal pace.  By mile 10, I was almost 50 minutes ahead!  I knew I was going too fast.  But I just didn't force myself to slow down.
In my defense, I knew it was going to get hot Saturday.  So, I sort of adjusted my running plans to adapt to the conditions I was being dealt.  I decided that once the temperatures climbed to the mid 70s I would start only walking . . . no running at all.  And I would keep that up until the sun began to dip and the temperatures moderated some.  Then, I would start back my run / walk intervals. (Note to self:  this plan didn't work out so good!)

I passed the marathon point at about 5:45.  Slow, but not slow enough.  But at this point I felt great!  It was about this time I shifted to walking only as the temperatures started getting up there!  Actually, I felt good up until about 33 miles.  By mile 35 I knew I was in trouble . . . serious trouble!  Not health-wise . . . but I knew 100 miles was likely not going to happen.   My walking was no longer a strategy, it was a necessity.  At mile 40 I crashed!  Bad!  I decided to stop and take a 30 minute nap!  I wasn't really sleepy, but I was hoping for some sort of miracle.  Sleep through some of the heat and recover some.


Actually that may have been my best move of the day.  When I woke up and got moving again, I had recovered to some degree!  The sun angle was much lower, and the temperatures had just started to moderate some.  I returned to a run / walk interval (but way more walking then running!) and even toyed with the thought that maybe I could continue on through the night.  But by the end of another 5 mile lap I knew my day would be done at 50.  And so it was.  The night before talking with Connie, I had acknowledged the next day didn't look good.  But anything less then 50 miles would be a failure.  So . . . while I don't look at this as a total failure, it was a DNF . . . the first DNF I've ever had. 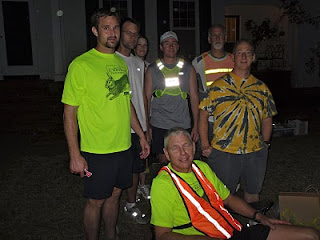 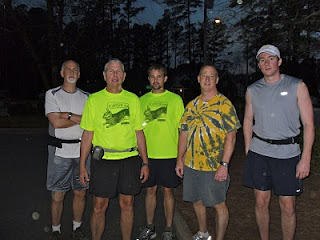 But this really isn't the story that needs to be told.  The real story are the members of the Rocky Mount Endurance Club that that were out there all day long pacing me!  In the morning it was great having these great people to run with!  I felt great and totally enjoyed the company.  This was going to be their normal Saturday long run.  But I expected that once the morning passed I would pretty much be going it alone.  After all, this was Easter weekend and everyone had family matters going on, company coming, etc.

But folks were there all day long!  I soo appreciated all their support and concern!

I'm afraid I may miss someone when I try to mention everyone's name.  So sorry if I do!! 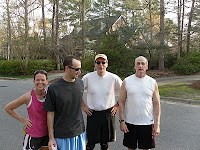 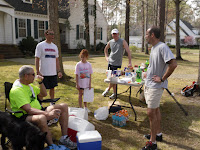 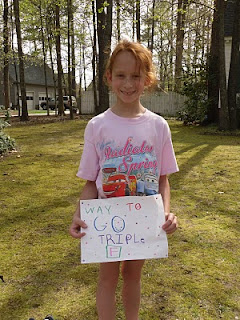 Then, Patti's husband Jeff and daughter Kayla and son Brandon came.  Kayla had made a sign of support for me!!!!  That really touched me! 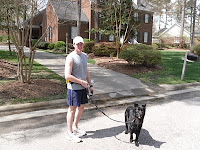 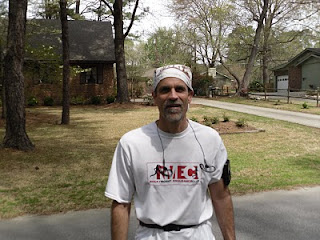 Kevin Boudreau came out for quite a while, then Ron Fleming and his dog Max returned for amother lap.

Then, Elaine Weisner joined me for my "crash and burn!"  (Sorry Elaine, I know you were ready to go a lot further!)  After my 30-minute nap, Steve and Tampa Cooper and their son Gabe came by and Steve joined me as did my buddy and Elaine's husband, Brad Weisner.  Soon Ron Fleming returned yet again.  Then, Amber Poole and Jon Shingleton joined the parade as did Eric Pate plus Jeff returned! (Jeff is just starting his running, but believe you me, he is going to be a really good runner soon!).  Scott Wingfield also came by with his truck full of kids!  Plus, several others drove by during the day, just to check up on progress.

All these folks were totally there for me and I appreciate it so much.  Also, Brian Lankford!  Brian was resting, getting ready to join me from midnight until 6 am!  Sorry I let you down Brian!

For the last 10 miles, this fun group of folks looked like a gang of teenagers out at night, walking the streets  We're luck the police didn't stop us!!  It was really like a moving party!  Quite funny . . . though I didn't feel like laughing at all!  Everything hurt! 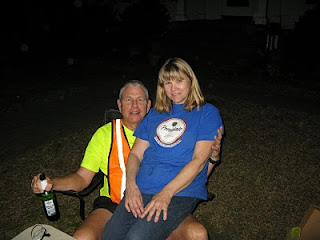 Last but certainly not least . . . thank you Connie!  For everything you did.

Here are some more pictures.
Posted by Frank Lilley at 4:39 AM 3 comments:

Just a quick update for those of you interested . . .

Basically, I wilted like grass clipping on hot blacktop.  My first DNF in my running life.  I was done by mile 35, but finished 50 only thanks to a whole bunch of great RMEC members who came out and kept me moving forward.