The weather was perfect!  Cold but not really uncomfortable . . . and not windy!  Probably 40 folks showed up to run.  The majority were planning to do the 10-milers but a few hardy souls were there for the full 26.2.


I got there early as set up our semi-aid station.  The big surprise was Margaret Bentley!  Though Margaret was injured and couldn't run, she had brought hot coffee, hot donuts and sausage biscuits . . . FOR EVERYONE!  Thank you so much Margaret!! 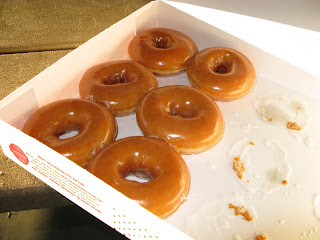 We did the road out-and-back sections first so by the time we were on the trail everyone was spread out.  Russ Hensley was planning to do about 10 miles and decided to hang with me on my first lap (so he wouldn't get lost!!).  Really nice to have company!

It quickly became clear just how many leaves were on the trail.  As we were going up the rocky section near the Dam site you couldn't even see the rocks!!  But they were still there!  All day long almost every step was an adventure!  If you've run Medoc before the leaves have dropped you really can't imagine just how hard it is in late November!  The added mental side makes the whole run way harder!

Russ and I stopped at the shelter at the ~5 mile point to re-supply and grab ANOTHER donut and sausage biscuit!  Down along the creek we saw Richard (from Greenville) coming the wrong way!  I still can't quite figure out how he got to where he was, but he was definitely turned around!  So he joined us for the next 2 miles back to the shelter.  Took spill #1 near the Bluff.  Nothing hurt but my pride!


Once we got to the field, Russ and Richard turned to the picnic shelter, and I continued on.    Plugged in the IPod and enjoyed some music along the way.  Coming down the rocks near dam site, I took spill number 2.  This one scrambled my brain some, so I just sat there for a few minutes to clear the cob webs.

Everything was fine as I continued on over the summit, down the fire road and back to the creek. Felt good and strong at this point.  I took several pictures and just was enjoying my time in the woods. 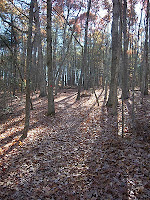 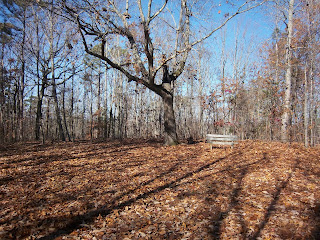 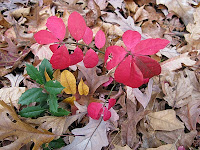 But as I neared the bridge I tripped again.  No 'tuck and roll', no 'gentle slide'.  This was a thud!  And I knew wasn't so lucky this time.  Not only did it scramble my brain again, but this time I knew I had hurt my wrist / hand.  Finally got up and started running again, but now with every step I could feel the beat of my heart in my thumb!  Not good at all.

Got back to the picnic shelter and saw Charles West there saying he was done . . . just not having a good day at all!  I talked Charles into doing the Bluff Loop with me.  By this time I was beat . . . mentally and even a little physically!  Charles and I called it a day at 17.5 miles.

Just my second DNF . . . twice this year.  The first one bothered me a lot, but this one not so much.  Running just killed my wrist and I really didn't want to risk another fall.  So I'm fine with my decision to quit.

I did enjoy seeing everyone finish their marathons!  Since I am usually one of the last finishers, this is a part I usually miss!  So much fun!

Certainly, Medoc is no cakewalk.  It is a hard run.  But with the leaves like they were it just adds an additional mental challenge.

Here are all the pictures I took.
Posted by Frank Lilley at 8:08 AM 2 comments:

Bottomline:  I loved it!  Good day all around!

Now, for those of you that simply don't have anything better to then read this boring blog, here is a little more detail.

I only decided to run this one at the last minute.  After Ridge to Bridge last Saturday, the top of my big toe was sore and I hadn't run.  But I thought it was feeling somewhat better.  Late Friday afternoon, Michael Forrester asked it I wanted in and I said "Sure!" thinking it would be virtually impossible at such a late date.  But then he said, "Your race number 768!"  Oh . . . . well . . .  I guess I'm doing it!  A little 'shoe surgery' and I felt like I had a good chance (Turns out I may do a career change and become a 'shoe surgeon' full time!!  My toe really didn't bother me much at all!)

Sunday was a cold fall morning, so I found my way to the parking area before 6 am and then just stayed in my car with the heater going!  Nice!  About 6:25 I headed to the start area, took care of some important business and just had a few minutes until the race started.  Only RMEC member saw was Eric Seale!  But other were there.  Just before the start I saw Susan Dumar and her friend, Lindsey, who I had met at Medoc!  That was pretty much the only person that I knew until I saw Ben Dillion as I was entering Umstead!  Even at the finish I saw no one I knew, except the folks I had met during the day! 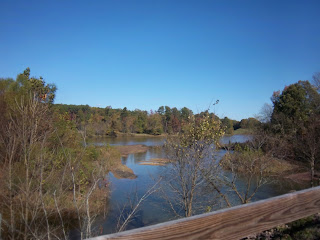 The City of Oaks marathon course is great!  No really spectacular scenery, but no ugly spots either!  Nice gently rolling course and the hills are fairly gentle.  Half marathoners miss the nicest sections, so next year you all need to step up to the full and see the whole course!

And the race organization seems to have done an excellent job with every detail save one . . . I really hate their electrolyte replacement drink - Heed!  Nasty tasting stuff . . . but not as bad as some drink they had a Grandma's Marathon a few years ago!  And I learned I liked the Hammer Gels . . . especially 'apple pie!'


I felt good from the very start of this race!  But I am now more convinced then ever that something very strange happened the week before at the Ridge to Bridge Marathon (R2BM)!  Ridge to Bridge is essentially an all down hill race from about mile 6 on.  How could I have gotten as tired as I was and finished with a 5:46 at R2BM?  Then, just one week later, run a 5:32 at City of Oaks and and felt like I could have turned around and run it again?  15 minutes lost at R2BM!!  No way!

The answer is simple: something supernatural happened the week before, as the last part of the R2BM ran at the base of Brown Mountain, the home of the Brown Mountain Lights!. (see my previous post if you missed this!).  That is where the lost 15 minutes is!  Either that or I was abducted by aliens at R2B . . . but they obviously wanted none of me and sent me back!
Posted by Frank Lilley at 5:31 PM 3 comments:

I've been thinking about Ridge to Bridge . . .

For the last two days, what happened to me at the Ridge to Bridge Marathon has haunted me.

While I admit I made some strategic mistakes at the R2B (see my prior post!) I wasn't that bad!

I had some issues around mile 7 that took a significant amount of time, so I tried to 'make up' time on the long down-hill section of the race.  But I felt like I did fairly well, passing the 13.1 mile point in about 2:27 and continued on to mile 15 at virtually the same pace.  Between 15 and 18 I slowed but pretty much held a 3 minute run and a 1 minute walk.  And from 18 on I just mixed running and walking as I could.

I admit I was struggling after 18, but I did still keep some good running in the mix.

When I was at about mile 17 I did some calculations and felt like I still was still going to be able to at least do a 5:25 marathon.  At mile 20 that estimation slipped to about a 5:30.  But when I finally finished the marathon, I crossed the line with a 5:47!!  And I don't believe I slowed up much at all after mile 20.

So what happened to the extra 17 minutes?  Where did that time go?

I've replayed this over and over in my mind and there was just no logical answer . . . until I remembered where it was we were running!

Maybe you have heard of the Brown Mountain lights.  Here is another link.

These strange lights have been seen for centuries.  Essentially on some nights, folks can look over to Brown Mountain and see lights moving along the mountain.  (Here is a link to a video).  There has been lots and lots of efforts to explain these lights but to date there has been no solid explanation.  The Brown Mountain lights a mystery!

Now, as far as I know no one has linked the phenomenon of the Brown Mountain lights with any unusual or unexplained time warps.  Nor have there been any reports of the time / space continuum being distorted around Brown Mountain.  But these have never been either studied or investigated.  Who knows?  All we know for sure is that strange things happen on Brown Mountain!