Most days I walk about 3 miles but I managed to complete about 5 miles on Medoc Trails the other day!  That is GREAT for me.  By the end neither my hip nor my foot were really giving me trouble!  So I'm trying.  Not running at all, but the walking wears me out!  Hahaha!

I know now that my hip pain is arthritis and not a repeat of a torn labrum.  So the doctor said that there was a hip replacement in my future at some point.  He suggested a series of hip strengthing exercises which I've been doing.  And surprise, surprise . . . they seem to be helping!!  I think these exercises are the reason I was able to walk 5 miles!  So I'm pretty excited about this.

But if the hip keeps hurting, I think I'll go ahead with a hip replacement even though the pain isn't all that bad.  I just don't see the point in waiting.  Hip replacement surgery is proven and with the new surgery approach, recovery is very quick.  And time marches on for me!  So if I want to have any chance of running again I probably need to be proactive and get it over with!

My freakin' foot is the other obstacle that I have to deal with.  The last surgery in December 2014 has worked to a degree . . . my toe itself no longer hurts!!  However, the metatarsal bone they cut off now hurts!!  I can't wear shoes any longer than an hour or so.  Plus, the bone hurts on the bottom of my foot.  Soooo . . .  what to do? 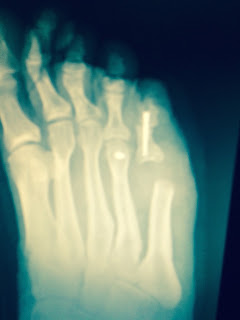 My ortho doctor wants me to try some custom orthotics, so I'm waiting on my pair to be made.  He believes these will at least relieve the pain on the bottom of my foot but I can't see how they will help with the pain on the side of my foot that prohibits me from wearing shoes.  But . . . it seems these orthotics may be worth a try.

And if this doesn't work?  Well, I really can't see me not being able to wear shoes for the rest of my life.  I don't know.  I just need to take this one step at a time.  Hopefully the orthotics will be the answer!

So . . . why this post?  This year is the 10th year anniversary of the Rocky Mount Endurance Club (RMEC).  The club started just after the Richmond Marathon that a group of us trained for.  The group wanted to continue on and the RMEC was formed.  Well, Michael Forrester sent out a challenge to all RMEC members to relive the Richmond Marathon next year . . . together by running it again.  That would be cool!  Realistically it would probably be my last marathon if I could do it.  And the chances of me actually being able to do it is slim to none.

The Richmond Marathon has a 7 hour time limit.  That means at least 16 minute miles.  So I would HAVE to run some but I could walk most of it.  Again, being realistic, I can't expect to really train much for this!  If I trained much (running, etc) I doubt if my foot and hip would hold up.  So my training would be only walking and probably not all that much of that.  And if I need to have a surgery, then I need to do it sooner rather than later!

But finishing the Richmond Marathon does seem like a great way to end my long distance running.    Richmond has always been one of my favorite traditional road marathons.  Right now . . . it's like I ended my running on a sour note.

(A couple of days have passed)

Another option might be a better option.  Honestly . . . with my body in the condition it is I don't believe doing a 16 minute mile for 26 miles is even close to possible.  Today (Nov 20)  I walked 6 miles about as fast as I could and it ended up taking an average of 17:20 per mile!  So I'm left with the question of can I go faster?  Or should I go longer?

Ever since my college days I've dreamed of thru-hiking the Appalachian Trail.  Several years ago the dream became much more real when my semi-son did it after he graduated from high school.  Then, in recent years I've considered the Pacific Coast Trail as an alternative.  But I'm afraid these just may be too much for too long . . . each would take 6 months or more of constant hiking with a pack.  That most likely would be too much for my body.

But my last "bucket list" challenge has been to complete the "Last Annual Volunteer State Run," a 314 mile adventure requiring you average ~31 miles a day for 10 days.  That would mean hard hiking 12 hours a day for 10 days in mid-summer across Tennessee (actually you cover Missouri, Kentucky, Tennessee, and finally Georgia).  Actually, I understand it's quite a bit harder than it sounds . . . but to me it just might be doable!  Maybe not finish in the 10 days allotted . . . but it is possible I could finish!!!!  If I chose this option, I wouldn't be able to share it with friends . . . I would be alone virtually the whole way.  That would be a plus for the Richmond Marathon.  I just don't know.

Realistically I just need to move on and quit dreaming about being able to do any of these.  They just aren't realistic.

Yesterday, I met Joe Bunn and Andy Barker at the Y and we walked 5k at lunch.  Some hip pain near the last 1/2 mile but the pain didn't "set in" after the walk.  And this morning my hip feels "normal."  Hopefully walking will be an okay alternative.  I still don't plan to run again . . . but maybe this walking will work for me!  If not, I'll keep trying to find alternatives.

Anyway . . . maybe walking is an answer!

If anyone has any suggestions for another aerobic exercise please let me know.
Posted by Frank Lilley at 4:34 AM No comments:

Folks . . . I don't want this blog post to be a downer.  I want it to be a celebration of sorts.  True, in my running life I have only very minor things to celebrate for most folks but for me, I feel good about everything.  I'm happy!   But I've had a couple of folks asking what was going on with me and I thought something was called for.

Running has been a part of my life for many years.  Damn . . . it seems like my whole life!

My favorite runs were trail runs . . . I just plain love running in the woods and in the mountains.  So many memories of awesome runs.  Especially on Bay's Mountain near Kingsport, Tennessee.  Such a GREAT place to run and enjoy the woods!  Plus, I love running is bad weather . . . running in the rain . . . and snow . . . really cold weather and really hot weather!  Soooo much fun!!

There was a ~10 year period where I had knee pain and had to give up on my running on doctor's advice, thinking I had arthritis and a knee replacement was in my future.  Luckily I discovered a way to begin running again without any surgery.  And so I started back running . . . a lot!  Lots of aches and pains through the years . . . a few knee surgeries and a hip surgery to name a few.  But I pretty much was close to 100%!

But now it is looking like I've run my last run . . . even short distances seem to be out.  My foot issues have plagued me since falling off of a ladder several years ago and now it seems my hip problems have returned and any running just causes too much pain for days and days.  I don't need to see a doctor to have a pretty good idea as to what is going on.  Oh . . . I will see a doctor fairly soon but I know pretty much what's ahead.  And I know my running days need to end.  So I'll just stop running.

Maybe I will find a solution to my hip problem that will allow me to run later.  Never say never.  But right now it's looking like my running days are over.  And I'm okay with that.

My running accomplishments are quite modest . . . embarrassingly few really!!  I was never a very good runner.  I really only competed with myself.  Honestly . . . if you ever considered me a competitive threat you just plain suck!!  Hahaha!

While I wasn't fast, I was very, very stubborn.  I was a pretty good at setting a personal goal and then working hard to achieve it.  Some goals I successfully achieved and a few I didn't.  But overall my running fulfilled a part of me.

I loved finishing races.  The last several years I was pretty much "DFL" in most races ("Dead Fu*king Last" for you non-runners!) but that never ever bothered me.  My goal was to finish.  And I usually did.  The only part about being last is I did feel sorry for the volunteers who had to wait for my sorry, slow ass to stumble across that finish line!

I found that I got way more personal satisfaction in finishing longer races than I ever did having a fast time on a shorter race.  5Ks and 10Ks just weren't nearly as rewarding as a marathon or longer.  I guess the challenge of the distance was what attracted me.  So the last segment of my running life was spent running longer distances marathons, 50Ks, 100Ks, 24 hour races, etc.

No need to feel bad for me!  I've had a great time running . . . it's just time to turn the page and I've had a couple of people ask what was going on.

And who knows . . . maybe things will change.

A big thank you to each of you that have been one of my running friends.  Especially all the Nooners!  We had something very, very special!  I can't tell you how much you all have meant to me.  Runners are just plain great folks . . . and ultra runners just plain ROCK

My hope is that each of you continue running just as long as you can.  And do a special favor for me.  Go out and try to finish a race (or run) further than you ever have!!  Really GO FOR IT!  And let me know how you did!!

But I do feel fairly good about those results.  My training consisted of 1-3 mile walks and one run of about 1 mile the day before!!  Not what you would really call "training."

I'm finding it difficult to do much real training. Partially a time problem but mostly a distance problem . . . the 6 inches between my ears!  I've got to develop a routine!!

I did have a PRK procedure done on my left eye on Tuesday (Jan 6th). After the numbing drops wore off it hurt like a MOTHERF%&KER for several hours.  But then . . . withing 15 minutes the pain simply went away and hasn't returned!  Doctor thought that was odd . . . but lucky! Seems when they say "mildly uncomfortable" they really mean "this is going to really hurt."  Anyway, this is all behind me and I can't wait to see how much my vision in that eye has improved.  It had gotten quite bad after all those retina tears this last spring.

Contact comes out Friday and maybe then I'll be able to see . . . Hahaha!!