Trail runners are becoming a problem . . .

I probably have a different perspective than most.  Besides being an ultra runner, I am also: 1) a race director, 2) the coordinator of volunteer trail maintenance at one of our state parks, and 3) on the Advisory Board of that park.  Plus, I've been a trail runner since about 1974.

And during my early days I would see some trash on the easy / short trails near parking areas.  But in the real backcountry I rarely saw much trash except around popular trout streams!  But that isn't the case anymore!  I'm seeing less and less hiker and fisherman trash.  But I'm seeing more and more runner trash!  Namely . . . empty gel pack and the tops of gel packs!

Come on folks!  We can do better than this!

So far all the runner trash seems to be going 'under the radar' of my park officials.  And those of us doing the trail maintenance (all trail runners at my park!) try hard to cover up the problem by picking up all we see.

My park is a fairly small park where we can easily cover the trails.  But some of the larger state and national parks have huge trail networks that become quite difficult to maintain completely.  At some point park officials will start noticing the trash problem . . . maybe some are already seeing it.  So . . . guess what happens.

Parks will start making it harder and harder for race directors to get permits to have our races!  That's what!

One more idea for trail runners . . . on your training runs, carry a plastic grocery bag and help us trail maintainers by pitching in and picking up trash any you see!  And if you see a park ranger, make sure he knows what you're doing!!!  :-) 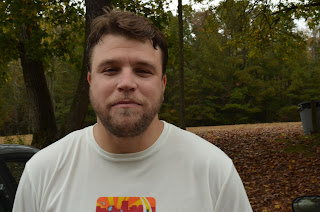 For the first lap and a half I had my buddy, Chad Wollenburg, with me and this made all the difference.  Chad must have scared Medoc because while he was there it really wasn't so bad.  Lap 1 was just fun (isn't it always??  :-)  )  Temperatures were perfect and just a little windy . . . Hurricane Sandy must have stayed east or something because we never got rain nor all that much wind.

Bridges were SLICK as usual.   There was a huge dead tree down that almost totally blocked a bridge down by the creek on Summit Loop and Chad took a really bad crash during his 1/2 loop . . . I was right behind him and I didn't see Medoc do it . . . so maybe it was just a slip.  Or maybe Medoc was under the bridge and tripped him.  I didn't check.

There were probably 60-70 young Civil Air Patrol members on a training exercise and I saw them all day.  (Thankfully they moved that dead tree on the bridge!).  I'm guessing all these folks just upset Medoc and by afternoon he was just simply pissed!  And guess who he took it out on?

When Chad left we had finished about 14.5 miles or so and we had maintained a slow but steady run/walk interval most of the way.   But when Chad left, things got harder!

Every 15 minutes or so something new would start hurting!  Then it would go away, only to be replaced by a different pain!  Hip would hurt for awhile, then my knee, then my foot, then . . . (you get the picture!)  Nothing serious at all.  Just pains!

Old and out of shape is not a very good combination.  I can't do anything about being old, but I can do something about my lack of conditioning.  Someone once told me that every run and every race is simply training for your next one.  So training has begun.  But I have a long, long way to go. 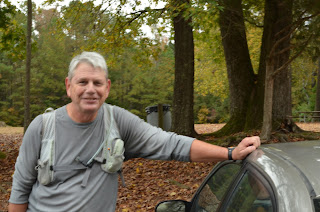 Now where is my medal???


Posted by Frank Lilley at 8:35 AM No comments:

Well . . . maybe I celebrated too soon!  Maybe my hip isn't all the way well!

Over the last week or so I've started feeling some of the old feeling in my hip!  Not a good thing . . . but not terrible either!  I guess the smart thing will be to go see Dr. Jones again and see what he has to say.

Perhaps my lack of hip pain was a combination of wearing away some scar tissue AND the hip injection he gave me 10 days before my 100.  I'll be giving it time before I go see him.  Plus, I'm going to try one really long run and see if that helps again!  I mean . . . what have I got to lose!!  :-)
Posted by Frank Lilley at 1:57 PM 7 comments: