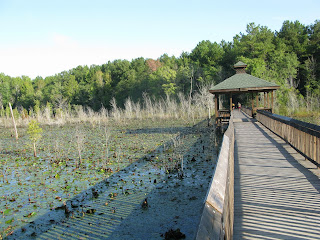 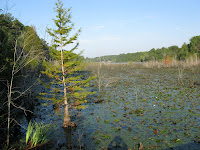 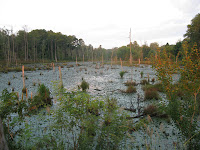 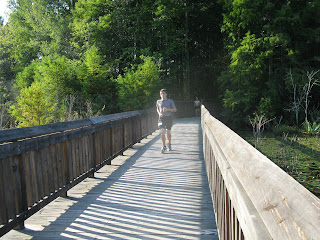 Mary Tillery ran 33 miles and her 'to-date' personal best run ... and first ultra!  Welcome to the dark side Mary!

Susan Dummar, though just recovering from an ankle injury, was determined to see what she could do.  She completed 50 miles, having to walk every step.

Ricky Scott joined his wife and the rest of the Rocky Mount, VA mafia for the event.  Ricky has been suffering through a serious bone spur in this heel.  Hoping it was better he came to run Hinson.  It wasn't better.  In fact it got worse and worse.  But Ricky had decided he was going to at least finish 20 miles.  Suffering ... he did.  Maybe foolish.  But certainly focused!

These were just a few of the stories I know about.  Believe me there are plenty more.  The place was the Hinson Lake 24-hour Run.

No other type event is as perfectly designed as a 24 hour run.  It is my new favorite format.  There are a few people that come out planning to run the full 24 hours.  But most don't.  No ... most folks come to see friends and and see what they can do. Most have a plan and a goal.  Some don't even have that.  They just come out to participate.

Yesterday, Mike Walsh had a plan.  Run from the 8 am start and finish 20 miles.  Then stop, rest and 'cool it' during the heat of the day.  Then, when things cool off, pick it back up and see what happens.  50 miles happened for him!

Got to spend some time with Amy Schimmel who I had first met at the Medoc Meltdown.  What a hoot!  So much fun . . . and a killer runner!  And Charles West!  Charles just kept me motivated all day!  I needed his help! 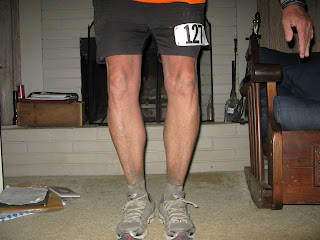 This is a spectacular event.  You run a 1 1/2 mile trail loop as many times as you can.  The loop is basically pretty flat and few roots.  At about 1 mile in there is a small hill where you run up a VERY sandy stretch of trail . . . like running on the high side of the beach in just deep, soft, loose sand!  Pretty hard running and lots of dust!  Actually about 1/8 of the trail was this 'beach sand.'  Since the temperatures got to the mid 90° levels the duct mixed with sweat to cake on your legs, socks and shoes.  Very strange!

You cross a cool wooden bridge with a gazebo at about the 1 mile point and then cross the dam when you finish your lap.

My plan was not a very good one.  Start, run when I can, walk when I must and see how far that takes me.  Was planning on only doing 20 miles or so, but the event brings out the best in everyone.  I struggled through 31 miles and was happy.  But if I had played it a little smarter ... well ... who knows!  31 miles is what I did.

As I finished my first lap, a guy ran by me just absolutely flying ... certainly a sub-7 pace!  I figured he was just a guy out to MAYBE do a marathon of so.  But all day he kept passing me!  And he didn't slow down.  I found out he was Mike Morton, a past winner of Western States!  He ended up completing ~153 miles over the 24 hour period!

And my (and everyone else's!) friend  Jonathan Savage was a machine all day and night.  I heard Jonathan finished 132 or so!  The thing about Jonathan is he has something encouraging to say every time he passes you.  He's just a super nice guy with incredible running talent!


And while the headlines belonged to these two super athletes, the other people I mentioned also won my heart!  Thanks for the inspiration my friends! 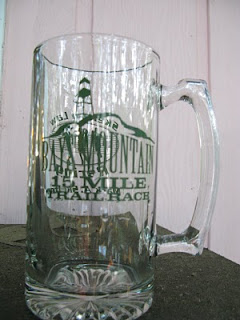 This impressive mug is nothing less then the award given to the 2st Place Finisher in the coveted and highly competitive 60+ Men's age group for the Bay's Mountain 15-mile Trail Run this last Saturday.  That's right friends and neighbors . . .  I kicked some competitive ass and walked away with the 2nd place goods!
Okay . . . so maybe this year it wasn't so competitive.  But it could have been!  Very easily!
Bay's Mountain is my favorite place to run ... period!  There are definitely some tough hills!  But the trails are so great!  And it is so pretty!
Last year there were five RMECer there, but the East Tennessee yellow jackets must have scared off all the others. Last year, a hive of yellow jackets stung almost everyone!  Eric Pate must have been especially tasty as he got stung over 50 times!
Before the race I hooked up with Iron Mountain Trail Runners members Tammy and Rick Gray and also Beth Minnick, all from the area.  Missing was Jennifer Nichols, another of the IMTR crew who was injured and decided to pass on this race.  Nice to see some familiar faces (even though I grew up in Kingsport!).
I had no real plan for the day ... other then to finish.  My training as been pretty slack recently and I was just trying to get in a good training run. Like last year, I pretty much wilted at 10 miles.  Unfortunately it's a 15 mile race.  The last five miles are not hard miles at all.  Actually they are fairly easy trail miles.  It's just that I was already spent.  Honestly, at the end of this run I felt like I had finished a marathon rather then just a 15-miler.  What a wimp!
I do love this race!  It's hard! But it should be! Hope I can come back next year too!
Posted by Frank Lilley at 5:01 PM 3 comments:

It's not often a golf course will allow a run on it's cart paths, but the Golf Club of Rocky Mount is an exception.  I mean, heck, they only make $ when golfers are playing ... not when runners are running!  But for this event runners start at 8:15 am and the golfers go out following them.  Actually seems to work out good for everyone concerned.

The  Golf Course at Rocky Mount (what a frickin' long name!) is REALLY beautiful.  I play golf there and ran there while they were constructing the course, plus I have volunteered at this race for two years.  But this year I decided to run.

I love the time just before the race starts.  Great chance to see folks you haven't seen in a while and catch up some.  Way too many folks to mention every one!

I had chosen to run the 5k.  For some reason, most everyone thinks that's funny.  But not me.  This was a chance to demonstrate my "killer" speed on a short run!  But since my surgery I have done ZERO speed work.  So, I walked to the starting line ... trying to come up with a plan!

So . . . I decided to start just a tad slower then usual and try to hold a steady pace until 2 1/2 miles and then see what I could do.  Since my GPS is broken, nothing was really known: not my pace, not my distance run . . . just had the mile markers on the course and I figured they were pretty close.  Actually I LIKED that I didn't have all that information.

The 10k started first and then about 5 minutes later the 5k race started.   Four waves and I joined the 3rd wave.  Soon, noticed I was passing quite a few folks ... odd for me!  But I felt like I was 'on plan' so I just kept my pace.  Near the end of the 1st hole I heard footsteps quickly coming up behind me.  Again ... odd!  And when they came up beside me it got even more odd!  It was Tom Thurman!  Tom should have been in the 1st wave!  But as he passed me he said he had been late to the start!

Other then Tom, no other 5k runner passed me during the race.

Up ahead I saw Eric Ghiloni who was running is very first race ever!  How cool is that!  My pace was just a little quicker so I slowly moved ahead.

Got to the aid station (1/2 way I guess) when I definitely got a surprise and a bath!  Someone yelled "Frank, we're supposed to 'soak you' when you pass by!"  So everyone threw a cup of water on me!  The kids loved it ,,, and so did I!

I continued to feel okay and was holding my pace fairly well.  As I approached the end of the 17th hole I tried to pick it up a little but I didn't have much in the tank.  As I neared the halfway point of the 18th hole I saw another older guy just ahead (read: maybe in my age bracket!) ... and he became my target.  Passed him at about the 3 mile point but just ran out of gas.  Unfortunately, the last 1/10 was an uphill.

But I tried to pick up the pace even more at the end when I heard Michael Forrester yelling "Frank, don't let him pass you!'  I'm guessing the 'him' was my target!  Don't know for sure . . .  'cause he didn't make the pass!  :-)

Damn you Sharon Scott! Damn YOU!

It all started this last weekend when I got a note from Sharon Scott asking me if I was going to try and get into Umstead this.  Seems Sharon has the memory of an elephant!

While running a MTC Shirt Run this summer I had mentioned to her in passing that I had missed getting into the Umstead 100 last year.  So, Sharon decides to ask me my plans for this year and was I going to try it and get in for the 2011 race. Now she was sneaky ... she didn't come right out and ask me.  But she told me she was "thinking" about doing it and was "wondering if I would be there.".  I'm sure she knew full well that she was MAKING me think about it.

In truth I had decided to pass on the 2011 run.  Heck, I probably wouldn't get it anyway and my running has really gotten bad recently.  Of course that truth wouldn't sound good, so I told her I was also thinking about it but would wait and see how my long run went this last weekend.  But my mind was made up at that point in time.  Monday, I told her I wasn't going to try and enter but instead I would be happy to pace &/or crew for her.

And today, when my Outlook reminded me that in 5 minutes the Umstead 100 entry process would open.  Well ... folded 'like a cheap pup tent' as Charles West says.  What the heck.  I'll try.  I probably would get in anyway.

But I did get in.  Damn you Sharon!

Now I'm going to have to get serious again.  Lot's of work to do and weight to lose.  But I'm hoping this will get me going again.  Give me a focus!  A goal to shoot for.  My last (and only!) 100 mile attempt was ill-concieved and poorly planned.  Plus, the weather didn't cooperate at all!

So I guess this time around I need a real plan.
Posted by Frank Lilley at 12:42 PM 4 comments: