I really don't know who to credit for the following . . . I certainly didn't write it!  But this sure seems about right to me.  I know my blog is a running blog . . . but sometimes stuff just leaks out!

A young woman was about to finish her first year of college. Like so
many others her age, she considered herself to be a very Liberal
Democrat, and among other liberal ideals, was very much in Favor of
higher taxes to support more government programs, in other Words
redistribution of wealth.

She was deeply ashamed that her father was a rather staunch
Republican, a feeling she openly expressed. Based on the Lectures that
she had participated in, and the occasional chat with a professor, she
felt that her father had for years harbored an evil, selfish desire to
keep what he thought should be his.

One day she was challenging her father on his opposition to Higher
taxes on the rich and the need for more government programs. The
self-professed objectivity proclaimed by her professors had to Be the
truth and she indicated so to her father. He responded by Asking how
she was doing in school.

Taken aback, she answered rather haughtily that she had a 4.0 GPA, and
let him know that it was tough to maintain, insisting that She was
taking a very difficult course load and was constantly studying, which
left her no time to go out and party like other people She knew. She
didn't even have time for a boyfriend, and didn't really have many
college friends,  because she spent all her time studying.

Her father listened and then asked , 'How is your friend Audrey
doing?' She replied, ' Audrey is barely getting by. All she takes are
Easy classes, she never studies, and she barely has a 2.0 GPA. She Is
so popular on campus; college for her is a blast. She's always invited
to all the parties and lots of times she doesn't even show up for
classes because she's too hung over.'

Her wise father asked his daughter, 'Why don't you go to the Dean's
office and ask him to deduct 1.0 off your GPA and give it to your
friend who only has a 2.0. That way you will both have a 3.0 GPA,  and
certainly that would be a fair and equal distribution of GPA.' The
daughter, visibly shocked by her father's suggestion, angrily fired
back, 'That's a crazy idea, how would that be fair! I've worked really
hard for my grades! I've invested a lot of time, and a lot of hard
work! Audrey has done next to nothing toward her degree. She played
while I worked my tail off!'

The father slowly smiled, winked and said gently, 'Welcome to The
Republican party.''

If anyone has a better explanation of the difference between
Republican and Democrat I'm all ears.


If you ever wondered what side of the fence you sit on, this is a great test!

If a conservative is down-and-out, he thinks about how to better his situation.
A liberal wonders who is going to take care of him.

If a conservative doesn't like a talk show host, he switches channels.
Liberals demand that those they don't like be shut down.

If a conservative is a non-believer, he doesn't go to church.
A liberal non-believer wants any mention of God and religion silenced.
(Unless it's a foreign religion, of course!)
Posted by Frank Lilley at 4:33 PM 4 comments:


I've never been a front runner, so I have never worried about actually winning a race.  Mostly I just compete with myself . . . PRs, ARs (annual records), etc. and a few races just trying to beat friends! And I really enjoyed those competitions.  Low stress and just fun times!

But now I am competing with a new competitor.  And this one is one steady competitor, incredibly consistent no matter the course or condition.  And this competition isn't just for fun anymore.

This competitor is the 'Ghost of Cut-off' and he is at almost every race I run.  Now my total effort is simply to beat him!  If I lose, I'm out of the race. . . so this is serious.  Very serious indeed.

We both start every race at the same time . . . me going out faster and 'the Ghost' holding back, but running the EXACT time to make it to the race cut-off at the appointed time.  All I have to do is stay just ahead of this invisible competitor.  But it's getting harder and harder to do.

I have no idea why I thought for a minute that the Harbison 50k would be relatively easy.

This one did surprise me!  I was expecting this to be harder then Frosty, but not all that much harder.  When I saw there was a 9 hour cut-off I thought this would just be a 'cake-walk' but was I ever wrong!  This one was a BEAR.  Harder then Medoc but slightly easier then Uwharrie.  No 'cake-walk,' that's for sure.


Probably 95% of the race was run on single track and for the most part you were either going up or down!  A very curvy series of trails totally filled with PUDs . . . pointless ups and downs.  The hills weren't long but there sure were a ton of them!  I believe I counted 2 zillion!  For the most part the curves were pointless too!  Many, many times I would look to one side or the other and see folks running just 30 yards away, but I would run 1/4 mile to get to where they were!  It messed with your mind!


This was the first year of Harbison, and RD Dan Hartley did an excellent job of both planning and execution.  I'm sure Dan saw things he wants to do differently next year, but from my perspective everything was wonderful.  I especially LOVED the aid stations!  These were so well stocked!  I can't begin to remember everything but some of the key things were: 1) hot chicken noodle soup, 2) boiled potatoes (my FAVORITE!), 3) Coke and Mt Dew, and a ton of other goodies!  These were the best aid stations I've experienced! 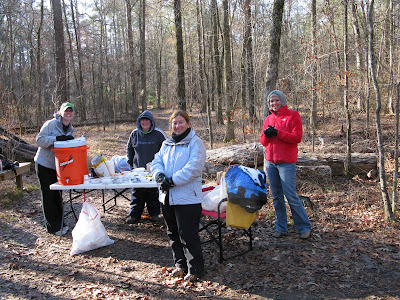 The day was cold and very windy.  Not too bad for us runners, but I sure felt bad for all the volunteers!  As all us runners know, it's the volunteers that make the race possible . . . folks giving up a day of their lives just to make our day better!  And I made the volunteers have to hang around a little longer then expected.  Sorry folks, but thank you so much!

For this race I met Erich Chatham, my son's old roommate.  Erich is really the guy that convinced me to try running an ultra . . . damn you Erich! 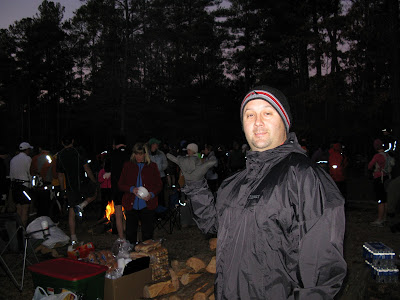 The race started promptly at 7:30. And Erich and I started at the very back of the pack.  Our plan was to take the first loop slow and easy and then decide how hard to go lap 2.  As it turned out Erich's and my pace (and my running interval) were different, so we separated after a mile or so.

By the time we came to AS #1 at about 6 miles, I knew this was NOT going to be the cake-walk I had expected!  Past the aid station, the crazy curves reduced some and I like this much better.  Nice ups and downs through this section until we came to AS #2.  Here I saw the first person walking back to the AS and pulling out of the race!

Here the trails got much more challenging and this continued until about mile 13 or so.  But from 13 to 15.5 we were mostly on forest service type roads not used for hiking.  About 3/4 mile from the half-way point the leader past me on the way to his finish!  That sucks every time it happens!

On purpose I didn't watch my GPS but I did at the half way point . . . 4 hours and 12 minutes!  Now I was beginning to understand the 9 hour cut-off really wasn't going to be so easy!  And I started thinking about 'the Ghost' behind me!  I knew it would be a huge challenge to finish this in the allotted time!  I was already definitely slowing down.

About two miles into the second lap a guy caught up to me and told me he was the race 'sweep'. Ahh . . . 'the Ghost' has arrived!  He said I was fine but that everyone behind him was being cut-off.  That got me bummed out as I realized Erich's day was done. 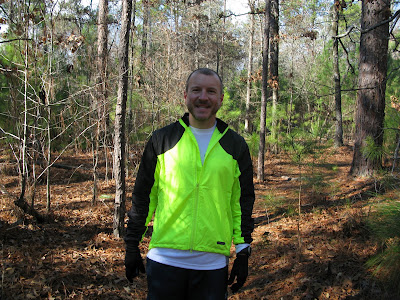 The 'Ghosts' name was Brian Clyburn and he was a great sweep and a really great guy!  He stayed behind me and never made me feel 'pushed' (though he did keep me focused on my pace and coming cut-off times at the coming aid stations).  I'm pretty sure Brian had NEVER gone that slow before!  But he was nothing but supportive!  Thanks Brian!

From this point on, I really just focused on the present . . . just dealing with what was there before me at that second.  Not thinking at all about what was to come.  As we approached the first aid station, Brian thought we had missed the cut-off.  I started thinking about Erich waiting and how much more I had to go, so I started thinking I was just going to accept the DNF and head home.  But it turned out I was almost 5 minutes ahead of the Ghost.   So after some quick aid we quickly (a relative term for sure!) headed out towards AS #2.

Brian was very familiar with this section of the trail and kept me informed about what was coming.  This was one of my favorite sections . . . nothing too tough and good footing.

Got to AS #2 and found I was still just ahead of the Ghost!  YESSSSSS!!  Talking with the ladies at the aid station I discovered that one was Terri Hayes!  Terri is an ultra running legend and a super popular ultra race director for a series of ultras in SC.  I was thrilled to finally meet Terri but wished I had more time to talk with her.  Hopefully some time in the future!  But the Ghost wasn't stopping.  He moves forward relentlessly.

Brian and I headed up Spiderwoman trail, the toughest section of the loop.  I knew this was going to slow me down even more.  I finally came to the realization during this section that Ghost was going to pass me before I finished.  I told Brian that 9 hours was not going to happen, but that I was going to finish for sure, even if I didn't make the cut-off and he told me he would stick with me!  All along the way, Brian was using his cell phone to talk with the next AS and with RD Dan so everyone knew where we were at all times!!  Kind of funny!

Passed AS #3 and we were probably late, but we kept truckin'.  This was the only station what was out of virtually everything.  I REALLY wanted some ultra 'jet fuel' (Mt Dew or Coke) but they were out.  I guzzled some water, got a gel and we were off! 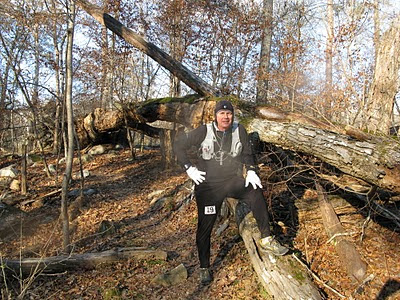 The next mile and a half was still hard, but we (I) just kept 'relentlessly moving forward' as best as I could.  This section had a part that I didn't even try to run . . . I almost couldn't follow the trail.  Super tricky footing.  The risk of falling outweighed the possible advantage of running.

Finally, we finished the section on top of another hill and came to the forest service road section.  I knew the worst was finally over!  And was I ever ready for this race to end!!  I looked at my GPS and it said we were at 30 miles . . . just one to go!  But that proved to be wrong!  My GPS read 32.5 miles when we finished!