"Show up and run" Marathoners

A new friend of mine recently wrote a new blog about running marathons.

First, you need to understand that she is a very accomplished runner. She has won marathons! Okay . . . so have I. But her's was a "real" marathons with more than one person running! But recently she wrote in her blog about her lack of recent competitiveness. Seems she realizes she is not running to her capability and has recently decided to re-dedicate herself to training.

Who can blame her? I mean, she is a really good runner with lot's of talent! But she did make one comment that has made me stop and think. Now, she was only talking about herself. She definitely wasn't passing any judgments on anyone else! But she did refer to "show up and run" marathoners. And she spoke of "returning from the "running dead."

In years past, I did really focus on my time. In fact, in my first marathon I was so disappointed in my performance I really didn't appreciate what I had accomplished. It took my second marathon to achieve my time goal and feel like I was a success. I worked hard . . . I trained hard . . . and I believe that I came close to my potential (I admit I never had much potential!)

But it was hard. Really hard. And I was often injured.

But today I just have fun. I NEVER freak over times. I never feel like a failure and rarely suffer from an injury.

Well, that's not quite true. I do feel like a failure when I'm on the edge of disqualification due to a cut-off time . . . something foreign to most of my running friends. I mean, I took a degree of pride in being the "last official finisher" of the Umstead Marathon last year. Hell . . . I had to really "book it" to stay in the race! And in my first 50k I was 10 minutes over their cut-off time, but they let me finish.

Positives of my current approach: 1) I can run the day after a race, 2) since I run races fairly often, I really don't do much real training, 3) I stop and take pictures along the way and have photo memories of almost every race I've run, and 4) I rarely suffer an injury.


What a crazy day!

I got to Medoc Mountain State Park a little early (6:30 am) and was surprised to find the gates were already open! The rangers at Medoc are really awesome. Super nice and they always do MORE then they say! They had promised to open the gate at 7 am! (Note to self: I've got to make sure they get recognized for how good of a job they always seem to do!).

Runners started pulling soon after I arrived and it was great to see these friends again. All in all about 42 runners turned out. I had about 25 t-shirts made up for any who wanted one ($10) and most were spoken for prior to the run. All were gone before 7 am. Next year I probably need to get more. 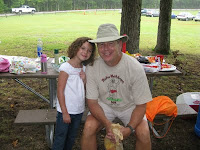 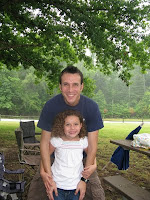 Aiden Kelly (Cam's beautiful daughter) was the official race starter and gave the traditional "Ready, Set, GO!) to start the run as promised about 7:20 am. At the same time the conch shell was blown to ward off “Medoc” (as he does NOT like the sound of a blowing conch shell . . . at all!)

The humidity was incredible! It had rained hard the afternoon before, so the air was LOADED with water! Just standing around I was soaked! A perfect August morning for a long run!

When the runners began passing "race central" after 3 1/2 miles, it looked like they had been out there for hours. Everyone was totally drenched! But smiling! At about 8:30 the sun came out and the temperatures started to quickly climb. By the time folks were finishing Lap 1 it was turning out to be a VERY hard day . . . even for late August in eastern North Carolina! Most folks came out planning to run "only" one or two laps (~8.7 miles per lap!) But quite a few who had planned on more decided maybe a lap or two was plenty!

Actually, quite a few of the runners opted to add additional "bonus" miles to their laps by intentionally missing turns and going on interesting, unplanned side excursions. 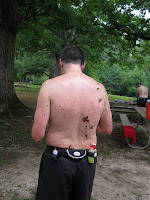 Also, "Medoc" assaulted several of our runners this year. Seems in the morning he must have been hanging out near a bridge on the first loop as he would run out and throw runners to the ground. Michael Forrester, the primary race director for the Medoc Trail Races in October, was the first victim. Michael says he was viciously thrown to ground as he crossed one of the bridges. Luckily, Michael was not harmed by the monster! Others were also attacked and thrown to the ground including MTCs Mark Long. Later in the day, Medoc moved to the eastern side of the creek where he continued his antics.

By 1 pm the field had narrowed to probably only 6 runners going for the full 34 miles (plus the “bonus miles" all six had chosen to add!!).

But finally at about 1:30 pm the runners caught a break! We started hearing thunder and soon the heavens opened up and it “rained cats and dogs.” Not so great for the hundreds of volunteers and spectators (okay there were 5 of us!) but a welcome relief for the runners. Dave Solomon told me that during the morning, his feet were totally soaked and squishing from the sweat. And during the afternoon the squishing continued due to the rain.

Cam had brought popsicles for the runners . . . quite the welcome treat in the hot, humid morning, but one runner quipped in the afternoon it got too cold for popsicles! Who would have believed?? 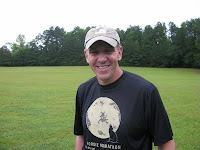 After about 6 hours and 54 minutes of fun, Fred Dummar became our first finisher in the middle of a torrential downpour to a lively rendition of “Winner at a Losing Game” on the conch shell by the Medoc Meltdown band. But no finish line pictures in the downpour. We did get the picture above after “Doom” got his shower!

Following “Doom” was the EEP group (Extra Excursion Pack ) . . . who had each taken several fun side trips during the day, adding those wonderful “bonus” miles to a 34 mile run. The EEP consisted of Tony Rouse, Steven Lily, Jim Plant, Tom Herbst and Dave Solomon. This group enjoyed the rain so much they refused to come in until all rain stopped! Pictures of the motley crew follow: 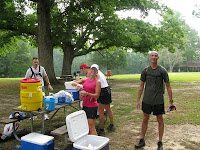 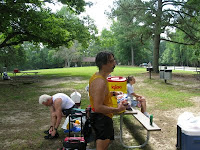 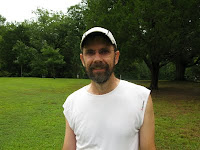 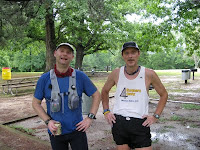 God is NOT a Runner!

I've just figured this out!

Summer was definitely not created by a runner and God created the seasons, so . . . without a doubt . . . GOD is NOT a runner!

All this time I've been thinking that running is good for you. We strengthen our aerobic capacity, our energy increases, we live longer . . . damn . . . I just had this superiority feeling being a runner. I wasn't taking the easy way out! I wasn't allowing my body to deteriorate. I was working hard at getting myself in the very best physical shape possible.

This "running thing" is hard . . . and I'll be rewarded for the effort! I mean, damn, I've run marathons, I've run 50ks and I've even run a 50 miler! These weren't easy. They were hard! Damn hard! And all this time I thought I was doing the right thing! Trying to keep my fitness at a high level.

Only a runner can appreciate the pain and suffering associated with a mid-day 6 mile run in 95 degree temps and 90 degree humidity. Only a runner understands the mental power it takes to finish a 20 miler on a hot, humid mid-summer run. The pain! The mental focus needed to run through the pain! If God isn't a runner, he wouldn't "get it!"

If he "got it" he might still let it get warm . . . there are plenty of other folks who like warm / hot weather! But there is no way he would let BOTH the temperature AND the humidity climb to opressive levels. One or the other but definitely not both!

Okay . . . so this isn't going to get me into heaven! But at least I know I've gotten through (or am getting through!) the summer "dog days!" I know I'm still trudging on! And come the fall, cooler weather, I'll be better off! There WILL be a payback!

But I was really thinking this would help me get into heaven! I already knew my "flag decal won't get me into heaven anymore!"